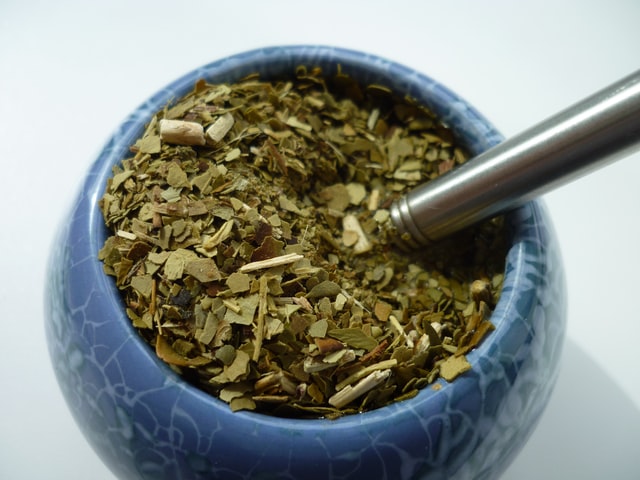 It’s said to have the strength of coffee, the health benefits of tea, and the joy of chocolate.

Here are the top 8 health benefits of yerba mate.

What Is Yerba Mate?

Yerba mate is an herbal tea made from the leaves and twigs of the Ilex paraguariensis plant.

The leaves are typically dried over a fire, then steeped in hot water to make the tea.

Yerba mate is traditionally consumed from a container called a gourd and sipped with a metal straw that has a filter at its lower end to strain out the leaf fragments.

Sharing it from this traditional gourd is said to be a sign of friendship and bonding.

1. Rich in Antioxidants and Nutrients

Interestingly, the antioxidant power of yerba mate tea seems to be slightly higher than that of green tea.

What’s more, yerba mate may contain seven out of nine essential amino acids, in addition to nearly every vitamin and mineral your body needs.

However, the tea contains very small amounts of these nutrients, so it’s unlikely to make a large contribution to your diet on its own.

At 85 mg of caffeine per cup, yerba mate contains less caffeine than coffee but more than a cup of tea (4).

Therefore, just like any other caffeinated food or beverage, it may increase your energy levels and make you feel less tired.

Caffeine can also affect the levels of certain signaling molecules in your brain, making it particularly beneficial for your mental focus.

Additionally, those who regularly consume yerba mate often rave that it enhances alertness like coffee — but without the jittery side effects.

However, these testimonials have not yet been scientifically proven.

Caffeine is also known to improve muscle contractions, reduce fatigue, and improve sports performance by up to 5%.

Since yerba mate contains a moderate amount of caffeine, those drinking it can expect similar physical performance benefits.

In fact, in one study, those given one 1-gram capsule of ground yerba mate leaves right before exercise burned 24% more fat during moderate-intensity exercise.

A higher reliance on fat for fuel during exercise spares your carb reserves for critical high-intensity moments, such as cycling up a hill or sprinting towards the finish line. This could translate into better sports performance.

The optimal amount of yerba mate to drink before exercise is currently unknown.

4. May Protect Against Infections

Compounds in yerba mate may also prevent the growth of Malassezia furfur, a fungus responsible for scaly skin, dandruff, and certain skin rashes.

Finally, research suggests that compounds in it may provide some protection against intestinal parasites.

Nevertheless, most of these studies were done on isolated cells. It’s currently unclear if these benefits are the same for humans, and more research is needed.

5. May Help You Lose Weight and Belly Fat

Animal studies show that yerba mate may reduce appetite and boost metabolism, which can help with weight loss.

It seems to decrease the total number of fat cells and reduce the amount of fat they hold.

Human research suggests that it can also increase the amount of stored fat that’s burned for energy.

Furthermore, in a 12-week study in overweight people, those given 3 grams of yerba mate powder per day lost an average of 1.5 pounds (0.7 kg). They also reduced their waist-to-hip ratio by 2%, which indicates lost belly fat.

In comparison, the participants given a placebo gained an average of 6.2 pounds (2.8 kg) and increased their waist-to-hip ratio by 1% over the same 12-week period.

6. May Boost Your Immune System

In addition, it provides small amounts of vitamin C, vitamin E, selenium, and zinc. These antioxidants can strengthen your immune system and promote health.

However, researchers have not yet investigated the direct effects of yerba mate on the human immune system.

Yerba mate may help lower blood sugar and reduce the complications of diabetes.

In fact, a recent animal study reports that it may improve insulin signaling.

It may also reduce the formation of advanced glycation end-products (AGEs), which are involved in the development and worsening of many diseases.

However, research in people is currently lacking.

8. May Lower Your Risk of Heart Disease

Yerba mate contains antioxidant compounds, such as caffeoyl derivatives and polyphenols, which may protect against heart disease.

Cell and animal studies also report that mate extract may provide some protection against heart disease.

That said, more studies are needed before strong conclusions can be reached.

How to Prepare Yerba Mate

Yerba mate is traditionally served in a container called a gourd, also known as a calabash.

It’s commonly sipped through a metal straw that has a filter on its lower end to strain out the leaf fragments.

To prepare mate, fill the bottom third of the calabash with dried or toasted mate leaves prior to adding hot water.

If you do not own a calabash, you can prepare it in a French press.

The tea is often served with burnt sugar, lemon juice, or milk and can be topped off with hot water several times before using new leaves to make a new batch.

Safety and Side Effects

Yerba mate is unlikely to cause harm to healthy adults who drink it occasionally.

However, those who drink it regularly may be at increased risk of the following:

Studies show that drinking large amounts of yerba mate for a long time may increase your risk of upper respiratory and digestive tract cancers.

However, some compounds in it may protect against other types of cancer.

Yerba mate contains caffeine. Too much caffeine can cause headaches, migraines, and high blood pressure in some individuals.

Pregnant women should limit mate intake to a maximum of three cups per day. Too much caffeine may increase your risk of miscarriage and low birth weight.

Finally, due to its caffeine content, it may also interact with the muscle relaxant Zanaflex or the antidepressant Luvox. Individuals taking these drugs should avoid yerba mate, as it can increase the effects of the drugs.

Yerba mate may not be suitable for everyone, and drinking it regularly at very hot temperatures may increase your risk of certain cancers.

If you’d like to give yerba mate a try, start slowly and make sure to let it cool a little before drinking it.