The MTV 2013 VMA’s was certainly an Epic event that took place in Brooklyn at The Barclay’s Center. Lady Gaga opened, Justin Timberlake took home the prestigious Michael Jackson award, and N’Sync even reunited and performed! Who could ask for anything more? Oh yeah…Miley……Who could forget that? Even if you wanted to try, I don’t think you could forget that horrific performance she put on! Thank you Miley! I will never forgive you! #Twerking will forever be indebted to you for making it a household name! That was about the only thing I could’ve done without! The VMA’s wasn’t the only Epic thing that happened at Barclay’s that night. The fact that it took place in Brooklyn although, was epic enough! Biggie would’ve been proud! Miss that guy!
At about 7pm, a giant mob of red heads emerged out of the subway screaming “Bonnie, Bonnie, Bonnie” and had the crowd in a tizzy! Who the heck is Bonnie anyway, and what does she want? For those who don’t know, Bonnie McKee is a songwriter responsible for many of Katy Perry’s hits such as ” California Girl’s”. She wrote only about 8 number 1 songs to top the charts. She has now come out with her own single that she performs called “American Girl”. It’s a really cute catchy song, and she talks about slurpies,7-11’s, partying, and not being sorry!
While Bonnie wasn’t at the VMA’s herself, her label Epic Records, and about 50 representatives of her swarmed the crowd with CD’s, T-shirts, and posters. They even had a van driving around playing the video. Great marketing by the label I must say! Amongst the mob of Bonnie’s, was myself! Yeah, I was one of the crazy Bonnie’s! Probably the craziest! It was really fun being able to promote such a talented artist. “American Girl” is a great song, it’s doing well on the charts, and I wish Bonnie McKee all the best!The label was filming the mob scene, and will use the footage to promote the song.

You can watch the mob scene here: Video by Christoper Garrett

To check out the single “American Girl”, you can visit here: http://youtu.be/nNXA0YjJkgs 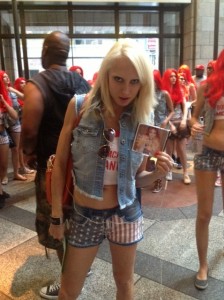 To leave you with some worde of wisdom from the Brooklyn native himself Biggie Smalls – “If you don’t know, now you know”