Menomonee Falls, WI (January 23, 2020) – This year, concern about contracting the flu is rampant. According to the Healthy Hand Washing Survey, 60% of Americans are extremely or quite concerned about catching the flu, compared to just 32% who felt that way four years ago. Among all age groups, Millennials expressed the most trepidation about getting sick.

The survey also found that, in response to flu outbreaks, Americans become more conscientious about hand washing when they’re out and about. Nearly 80% say they wash their hands more frequently, more thoroughly or longer after using a public restroom.

The findings are part of an annual survey conducted by Bradley Corporation that queried 1,005 adults and youth throughout the United States about germs, the flu, colds and hand washing habits. The respondents represented four generations – Gen Z, Millennials, Gen X and Baby Boomers.

With flu concerns prevalent, the national survey revealed that nearly two-thirds of Americans correctly believe that hand washing is more effective in removing germs than hand sanitizer – a fact supported by the Centers for Disease Control and Prevention.

“Thorough hand washing with soap and water remains the best way to reduce the spread of disease-causing microorganisms when caring for sick family members,” says medical microbiologist Michael P. McCann, Ph.D., professor of biology, Saint Joseph’s University. “Soap and water, used as per the evidence-based recommendations of the Centers for Disease Control and other government agencies, will help reduce the spread of flu and other illnesses in the home and work place.”

Overall, germ avoidance is top of mind. At home, if someone is sick or if a cold or flu virus is going around, Americans kick into action. 65% wipe down bathroom and kitchen surfaces and 47% wipe door knobs and handles.

And, when they’re sick, respondents say they change the way they greet people. 54% wave hello, 48% avoid shaking hands and 18% use a fist or elbow bump to avoid hand-to-hand contact.

In a public restroom, 93% of Americans try to avoid coming in contact with germs by employing evasive measures. 65% use a paper towel when touching door handles, faucets or toilet flushers and 44% operate the toilet flusher with their foot.

“Americans are increasingly employing defense mechanisms against sickness,” says Jon Dommisse, director of strategy and corporate development for Bradley Corp. “During the cold and flu season – and year round – everyday preventive measures like hand washing with soap and water can help stop germs in their tracks.” 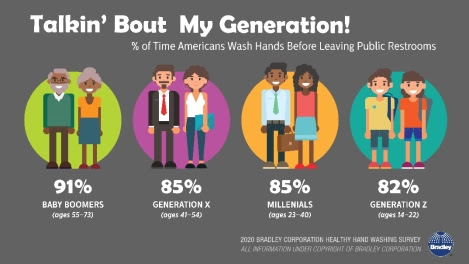 Unfortunately, there is also a rinse-and-run phenomenon. 67% admit they’ve skipped the soap and simply rinsed their hands with water after using a public restroom. Of all the age groups, Gen X is mostly likely to short cut hand washing with 73% admitting they’ve only rinsed their hands.

The 11th annual Healthy Hand Washing Survey by Bradley Corp. queried American adults and youth online Dec. 11-16, 2019. Participants were from around the country, were 14 years and older, and were fairly evenly split between men and women (47% and 53%).