It seems that every other week there is another management fad around the type of culture you should create to get the most out of your team.  Some say teams should be like friends who just happen to work together—flat groups that are motivated by how well they get along.  Others argue that the best teams butt heads and harness competitive energy to get the best results.  Our answer? Like good researchers and consultants, we say it depends.  Our work on team dynamics at the Wharton School has told us that there is no one right team culture – the key is knowing what your team type is and managing its strengths and weaknesses effectively.

Through our research, we have identified four common team cultures, determined by two sets of characteristics: 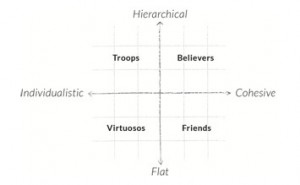 Where does your team fall on each spectrum? To get the most out of your people, consider your culture type and think about how you can maximize your strengths while attacking your blindspots:

Troops (low on cohesion, high on hierarchy) The team Steve Jobs assembled to produce the iPhone falls into this quadrant. He assembled the company’s superstars, pitting them against each other under the threat of being blamed for product failures. The team was heavily individualistic, but committed to Jobs’s vision, which eventually produced a breakthrough product. The strength of this team type is in the common direction provided by a strong leader. The downside is the lack of feedback, since team members work in siloes and aim mainly to serve the leader.

Believers (high on cohesion, high on hierarchy) Facebook is characterized by an iconic leader in Mark Zuckerberg (and increasingly Sheryl Sandberg as well) but also a cohesive bond between employees around a strong culture of experimentation embodied in the phrase “the hacker way.” Believer cultures like the predominant one at Facebook are energized and rally around a compelling vision, but they can easily succumb to groupthink.

Virtuosos (low on cohesion, low on hierarchy) In 2003, Phil Jackson added basketball legends Gary Payton and Karl Malone to a Lakers team that already featured Kobe Bryant and Shaquille O’Neal, two future Hall-of-Famers. The team of big egos stormed through the regular season and play-offs but sputtered out in the NBA finals that year, winning only one game against the Detroit Pistons, a team with much less star power at that point but a great deal of team chemistry. Like that Lakers team, Virtuosos benefit from having the talent to take on big challenges with gusto, but the lack of team rapport or a strong leader can cause them to pull apart under duress.

Friends (high on cohesion, low on hierarchy) W.L. Gore is one of the few large companies with relatively little top-down structure. The 10,000 employees make decisions on everything from projects to hiring through self-managing teams of 8 to 12 people. As CEO Terri Kelly says: “It’s far better to rely upon a broad base of individuals and leaders who share a common set of values and feel personal ownership for the overall success of the organization. These responsible and empowered individuals will serve as much better watchdogs than any single, dominant leader or bureaucratic structure.” Research on leadership styles shows that this empowering approach can pay dividends in the long run, since team members become highly engaged and collaborative. In the short run, though, these teams get a slower start as individuals take time to achieve a high comfort level with each other and their roles.

There is no one right culture. The important thing is to be aware of the trade-offs with each one and manage your team structure accordingly.  In considering your own team type, you should assess whether a strong vision and delegation from the top or a more informal structure will contribute to peak performance. You should also consider whether you are better off working in interconnected silos, or tackling each task collaboratively. Having this conversation early on, using our two-axis framework, will help you start defining and organizing roles in a way that promotes team success down the road.

Dr. Mario Moussa, Dr. Derek Newberry and Madeline Boyer are the authors of Committed Teams: Three Steps to Inspiring Passion and Performance. Dr. Moussa teaches in the Executive Programs at Wharton School of Executive Education. Dr. Newberry and Boyer are lecturers at the Wharton School of Business and Senior Consultants at Percipient Partners. For more information, please visit, www.moussaconsulting.com and www.percipientpartners.com and connect with the authors on Twitter,@Committed_Teams.