The role happened by accident.  She was on set, and the girl they hired for the part was was too tall for the scene, so they grabbed Kelly Ann who’s 5’6 and would work better with the rest of the cast.  They threw her into hair, makeup, and wardrobe, and turned her into a rockstar assistant! They then sat her on the couch across from Judy Greer who plays “Christy” in the film.  Christy is the x-girlfriend of “Perry” played by Billie Joe.  Her and Judy began talking like they are BFF’s.  Some nerdy grungy guy joins them and starts chatting.  Low and behold it’s Billie Joe.  Kelly Ann didn’t recognize him at all! He had a beard, glasses, and was dressed like a bum! She thought he was part of the crew until Judy told her who he was after he walked away! Kelly Ann had no idea what movie it was and who was in it.  Another surprise was a rock goddess that was just hanging around the set.  No clue why she was there, but Joan Jett was looking fabulous in her leather getup and short jet black hair!  The best part on set was when They were calling “Last looks” for Joan’s scene. She comes out in front of everyone and yells “Last looks! On my puss!”  She was amazing! Kelly Ann was also coaching her on her acting!  They got a lot of great footage and hopefully it makes it to the big screen!

Geezer is is about a middle-aged man who’s married with a child. He decides to get the band back together. 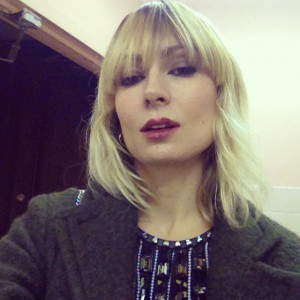