American Primetime Telivision aka “APTV,” is a new television channel launched in 2012. APTV features cutting edge content, including all original programing such as Ken Kushner’s “The Psychotics”. You can learn more about APTV here: http://americanprimetimetv.com

“The Psychotics”, created by creative genius Ken Kushner, is a fictional comedic horror series that depicts the life of the Kaiser family happily situated in a cozy neighborhood in Long Island, NY. Au contraire my lovely little friends, the Kaiser family is by no means your typical ordinary family that’s for sure! The creepy sereis started filming it’s pilot this summer in New York. To check out the show you can visit their lovely facebook page with lot’s of pretty pictures here: https://www.facebook.com/pages/The-Psychotics/481876041864733 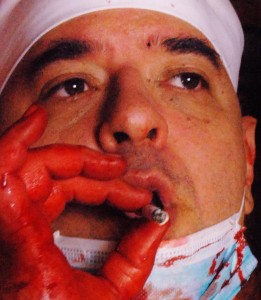 Ken Kushner as “Ben Kaiser” on “The Psychotics”

Ken Kushner, born and raised in NY, lives, breathes, and eats entertainment. When he’s not acting, producing, directing, or writing, he can be found running the Winter Film Awards, filming the Psychotic’s, and yes he is also a lawyer. I wouldn’t want to mess with this guy. He became a lawyer when he learned that his lawyer wouldn’t sue someone, because the party he wanted to sue, were also his clients. Thank goodness Ken’s on my team! Luckily, he cast me in his series “The Psychotics”, which just happens to be very fitting for me 😉

I play Paula who is an actress that drags some of her friends from her self-help group into acting class with her. That is also not a huge stretch for me, but that is what I like about working with Ken. He let’s you be yourself, and all the characters in the show are pretty much crazy psycho’s, so who wouldn’t want to be a part of that? When he is directing, he will tell you, “You’re depressed”, or “You’re pissed off”, so you have to be able to act, but it’s just really fun playing a crazy! That is becuase I’m not one in real life of course! Only on day’s that end in “Y”! Ha! Just kidding!

A few years ago, I was fortunate enough to meet Mr. Kushner, and I just really dug his idea! He’s a great storyteller! I couldn’t wait to get started on the project! We filmed the teaser over the summer, threw a little wrap party at the Chelsea Manor in manhattan, and it was loads of fun! “The Psychotics” is just that, Psychotic. So, if you like horror, blood and guts, murder, suspense, and oh yeah, comedy, then you will love “The Psychotics”. If you’re as crazy as me……..that is.