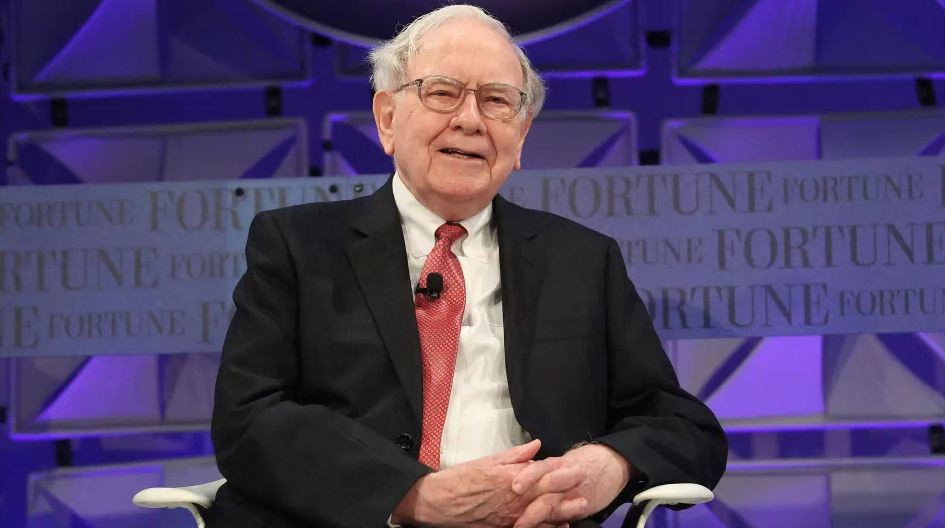 Trying to build your savings, pay off debt and make the most of your money? You might want to try living like a billionaire — but only if that billionaire is Warren Buffett.

The investor — known as the Oracle of Omaha — is the CEO of Berkshire Hathaway. But there’s more to this American business magnate than just his job. Despite his roughly $78 billion net worth, according to Forbes, the sixth-wealthiest man in the world enjoys a life of simple taste, frugal living and generous philanthropy. Here’s a look at Warren Buffett’s tips for living frugally.

In today’s money, Buffett would have paid about $43 per square foot for the 6,570-square-foot home. But these days, the home is worth about $161 per square foot, according to the home’s current value listed by the tax assessor’s office in Douglas County, Nebraska, where Buffett lives.

If you want to live like Buffett, consider buying less home than you can afford. Instead of paying pricey mortgage payments, you’ll be able to put more of your money toward savings, retirement or vacations.

“If you’re wrong and rates go to 2 percent, which I don’t think they will, you pay it off,” he said. “It’s a one-way renegotiation. It is an incredibly attractive instrument for the homeowner and you’ve got a one-way bet.”

2. Buffett Starts His Day With a Cheap Breakfast

You might assume billionaires brunch at the most extravagant restaurants, ordering eggs Benedict and bottomless mimosas. Or, they hire a personal chef who can whip up whatever and whenever they want — right?

Wrong. Adopting Buffett’s lifestyle doesn’t include paying high prices for daily gourmet French toast prepared in the comforts of your own home.

When it comes to food, the billionaire investor has been known to save money by taking the fast-food route. In fact, he might kick off his day with a trip to McDonald’s during his five-minute drive to work, reports CNBC.

If he’s feeling rich, he’ll splurge by spending $3.89 on a bacon, egg and cheese biscuit sandwich. If the market’s down, he might spend $3.19 on a sausage, egg and cheese sandwich instead. On a really bad day, he buys two sausage patties for $2.38, puts them together and washes it down with a Coke he pours himself.

Buffett also is known to opt for cheap food when he’s on the road — but forget the cholesterol-soaked bacon and eggs at a local restaurant. Buffett’s travel breakfast might consist of a pack of Oreos, his friend Bill Gates — yes, his good buddy is the Microsoft founder — wrote on his blog.

“One thing that was surprising to learn about Warren is that he has basically stuck to eating what he liked when he was 6 years old,” Gates wrote. “He did move past baby food, of course, but he mostly eats hamburgers, ice cream and Coke.”

Buffett explained his diet in a 2015 interview with Fortune: “I checked the actuarial tables, and the lowest death rate is among 6-year-olds. So I decided to eat like a 6-year-old. It’s the safest course I can take.” 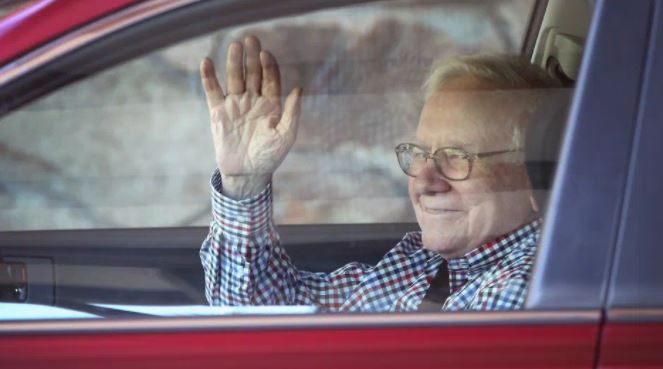 Although some CEOs drive around in million-dollar cars, you’ll likely find Buffett driving something much more modest.

In a BBC documentary, his daughter, Susie Buffett, said he bought cars that he could get at reduced prices — like those that had been damaged by hail. The cars were fixed and didn’t look hail-damaged and became a regular part of the Buffett lifestyle.

“You’ve got to understand, he keeps cars until I tell him, ‘This is getting embarrassing — time for a new car,’” said his daughter in the documentary.

Buffett also told Forbes in 2014 about his car-buying habits — or lack thereof. “The truth is, I only drive about 3,500 miles a year so I will buy a new car very infrequently,” he said.

Remember this the next time you’re in the market for a car: Cars tend to depreciate quickly, so it can be better for your finances if you try to keep your well-working car for as long as possible — or at least opt to buy a used car instead of new. 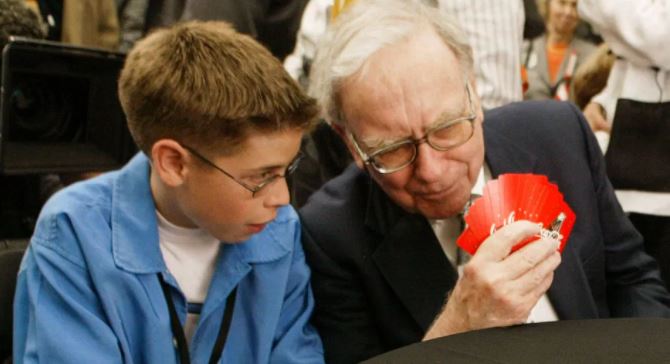 A commitment to live like Warren Buffett doesn’t mean all work and no play. After all, even billionaires have hobbies. But compared to other famous CEOs, investors and entrepreneurs, Buffett’s hobbies are much more affordable. For example, he enjoys playing bridge.

“If I play bridge and a naked woman walks by, I don’t even see her,” laughed Buffett during a CBS News “Sunday Morning” interview. Yep, Buffett is a self-proclaimed bridge addict, and you might even catch him playing the game about 8 hours a week, according to a Washington Post interview from 2017.

“I one time said that I wouldn’t mind going to jail if I had the right three cellmates so we can play bridge all the time,” he also said in the interview.

When Buffett’s not busy being a business mogul, you might find him strumming his ukulele and singing as well. He’s played for investors and at charity events. A video of him playing the instrument with Gates even went viral after it was posted on Gates’ blog in 2016.

5. Buffett Treats His Friends Well, but Not Extravagantly

What do you give a friend who’s also a billionaire? Buffett’s long-standing friendship with Gates is legendary. In honor of Buffett’s 90th birthday, the Microsoft magnate explained on his blog what’s kept their friendship strong over the years:

“Of all the things I’ve learned from Warren, the most important thing might be what friendship is all about,” Gates wrote. “A person that I admire as well as like — that’s the perfect description of how I feel about Warren. Happy birthday, my friend.”

And Buffett didn’t earn Gates’ gratitude through grandiose and expensive gestures. Instead, it’s simply about how he treats others. In his 2016 blog post, Gates gave examples of how Buffett is a kind and thoughtful friend, such as driving personally to the airport to pick up Gates whenever he’s in Buffett’s hometown town, calling frequently and sending news clippings by mail that he thinks Gates and his wife will enjoy.

Those special touches that mean a lot to friends just might be the best takeaway for those seeking to live the Warren Buffett lifestyle.

Buffett likely won’t be shelling out big money for the newest iPhone, even though he’s now using one. The billionaire revealed in a February 2020 CNBC Squawk Box interview that he has been given several iPhones, including by Tim Cook.

He stated the Nokia flip phone, which he had held on to for years, is permanently gone and he now uses the newest model iPhone, which was an iPhone 11 at the time of the interview.

While it’s tempting to always splurge on the latest technology, take a page from Buffett’s book and only upgrade your phone when you really need to. If you insist on buying the latest iPhone to hit the market, look for other ways to save on your phone expenses, such as using a no-contract phone plan or buying a family plan to share data. 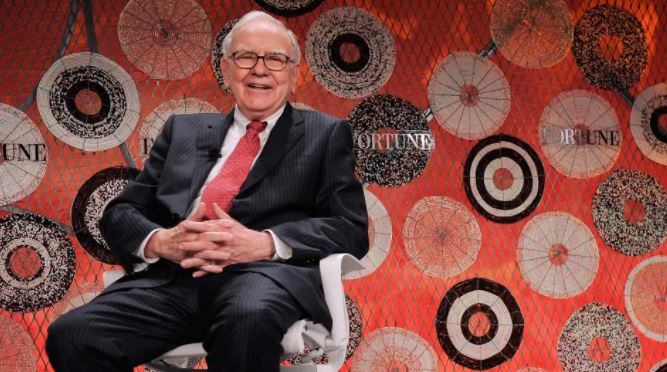 Buffett shuns high-end designer suits. Instead, he exclusively wears suits created by a Chinese sewing entrepreneur named Madam Li, whom he met in 2007.

The takeaway: Opt for quality goods that will last you a long time, rather than buying something just because it has a brand name attached to it.

Buffett proves that even billionaires still appreciate an opportunity to save money. In Bill and Melinda Gates’ 2017 annual letter, Bill recalled a trip he took with the investor, during which Buffett paid for their fast-food lunch using coupons. He even provided photographic proof of this.

“Remember the laugh we had when we traveled together to Hong Kong and decided to get lunch at McDonald’s? You offered to pay, dug into your pocket, and pulled out … coupons!” Bill wrote. “Melinda just found this photo of me and ‘the big spender.’ It reminded us how much you value a good deal.”

Save on your next purchase — even if it’s something as inexpensive as a McDonald’s meal — by using applicable discounts, which you can easily find on online coupon sites.

9. Buffett Has Worked in the Same Office Building for More Than 50 Years

Buffett has remained in the same office building since he joined Berkshire Hathaway in the 1960s.

Even if you’re not a business owner, you can still benefit from Buffett’s way of thinking. It boils down to the old saying: If it ain’t broke, don’t fix it.

10. Buffett Thinks Outside the Box To Save Money 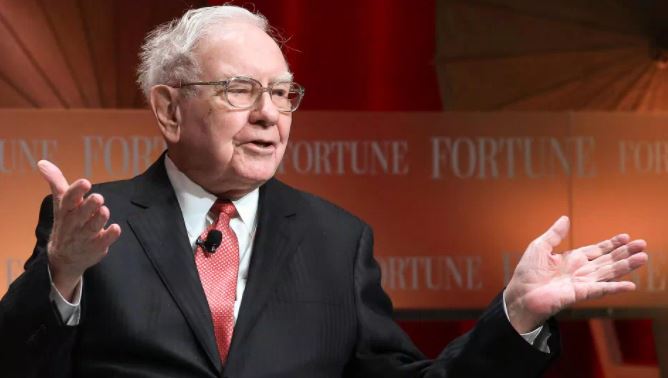 In Roger Lowenstein’s biography of the businessman, “Buffett: The Making of an American Capitalist,” the author says that after Buffett’s first child was born, he converted a dresser drawer into a space for the baby to sleep instead of spending money on a bassinet, reports Forbes. When it came to the family’s second child, he borrowed a crib rather than buying one.

Perhaps making your baby sleep in a drawer seems a little extreme, but it’s just an example of thinking outside the box. Use resources that are already available to you to prevent unnecessary spending.

Buffett explained his choice to live frugally during a 2009 Q&A session he conducted with a group of business school students.

“You can’t buy health and you can’t buy love,” said Buffett, according to the Underground Value blog. “I’m a member of every golf club that I want to be a member of […] I’d rather play golf here with people I like than at the fanciest golf course in the world. […] I’m not interested in cars, and my goal is not to make people envious.”

And in a 2017 interview with People, Susie Buffett said of her father: “…it’s really true that he does not care about having a bunch of money.” Instead, she said, he emphasizes family.

“I don’t think people realize, he’s got a bunch of great-grandchildren and he could tell you everything about what they’re all doing. He knows every one of those kids and he knows about their lives,” she said.