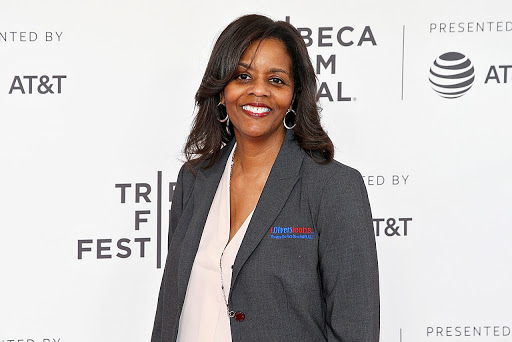 Apple has been sued by Katrina Parrott (under Cub Club Investment, LLC), a Black businesswoman, for copyright infringement of her “iDiversicons” and more specifically her copyrighted system for letting users choose from five skin tones of color that debuted on Apple’s App Store in 2013 and on iTunes in 2014.

Parrott claims Apple stiff-armed her pursuit of a partnership deal after a series of 2014 meetings and communications between herself and two senior Apple software engineers, who got a close look at her technology. Apple released its own five-skin tone keyboard modifier pallet in April 2015, and downloads of Parrott’s iDiversicons dropped.

In a lawsuit filed on Friday in federal court in Waco, Texas, Parrott accuses Apple of infringing her copyright and trade dress, misappropriating her ideas and technology, unfair competition and unjust enrichment. She seeks a court order blocking Apple from using her work and unspecified money damages based on Apple’s profits and her own lost business opportunities from the alleged copying.

Below is graphic from a Document from Parrott titled “Applying Color Theory to the World of Emoji.” 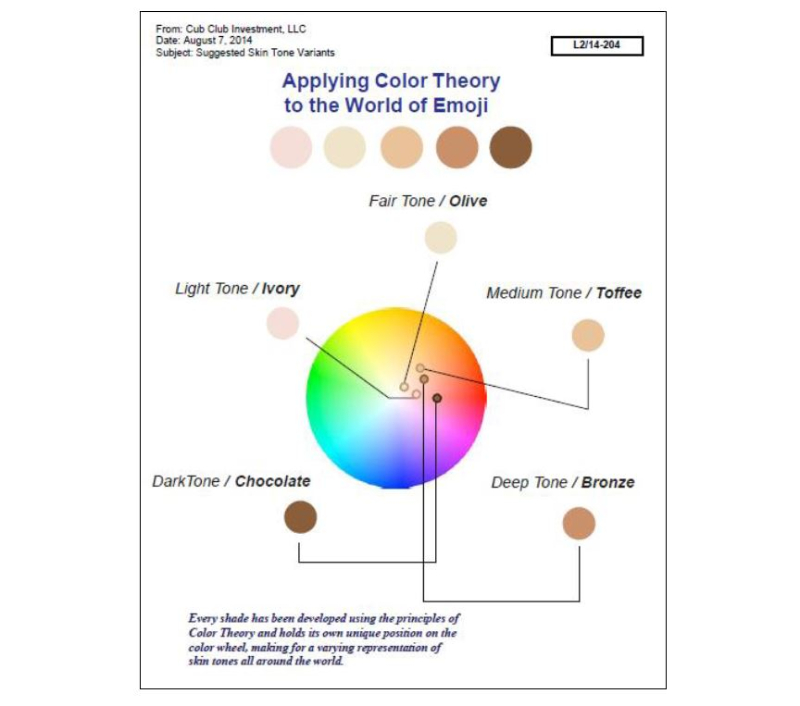 Below are a series of comparison emoji examples between Parrott’s iDiversicons vs. Apple’s icons from iOS 13.3.

Since 2014, Mrs. Parrott has been internationally recognized as the creator of five skin tone emoji, and she continues to be recognized as the pioneer in digital communication by progressing diversity and inclusion through iDiversicons®. Co-founder and president of Unicode Dr. Mark Davis praised Mrs. Parrott’s innovative work, saying, “Without you, we certainly wouldn’t have come up with as good a solution!” American University recognized Mrs. Parrott as a pioneer in diversity and inclusion, and the 2019 film “Picture Character: An Emoji Documentary” featured iDiversicons® emoji.

Starting at a UTC meeting in May of 2014, Mrs. Parrott began discussing a potential partnership between CCI and Apple concerning her copyrighted diverse emoji with Apple’s senior software engineer and senior director.

On March 27, 2014, Mrs. Parrott sent a first letter by mail and email to Tim Cook, CEO of Apple, requesting a meeting with Apple to discuss a potential partnership between CCI and Apple.

On May 2, 2014, Mrs. Parrott sent an email to Mr. Cook requesting an in-person meeting.

On or around May 7, 2014, Mr. Edberg helped coordinate a meeting between Mrs. Parrott and Celia Vigil, Apple’s Senior Director for Frameworks and Fonts at the time.

Mr. Edberg helped coordinate the meeting between Mrs. Parrott and Mrs. Vigil to explore partnership opportunities between Apple and CCI.

On or around May 7, 2014, Mrs. Parrott provided Mr. Edberg a thumb drive with over 100 iDiversicons® emoji, which Mr. Edberg uploaded to his laptop computer.

On or around May 7, 2014, Mr. Edberg shared the uploaded emoji from Mrs. Parrott’s thumb drive with Ms. Vigil during a staff meeting.

On or around May 7, 2014, Mr. Edberg requested that Mrs. Parrott create (1) a series of five skin tone female emoji to compliment the iDiversicons® male police officer and construction worker emoji; and (2) a unicorn emoji based on requests from Apple product users.

On May 9, 2014, Ms. Vigil replied to Mrs. Parrott stating, “Thank you for taking the time to meet with me. I pointed my colleagues at your [iDiversicons®] application. I can also show them the images you shared with Peter.”

On May 9, 2014, Mr. Edberg sent Mrs. Parrott an email stating, “I hope we can work out something between iDiversicons and Apple.”

On May 23, 2014, Mr. Edberg sent Mrs. Parrott information regarding the Unicode Standard.

On June 12, 2014, Mr. Edberg responded to Mrs. Parrott’s email with recommended edits and comments after reviewing the Research Paper.

On September 26, 2014, Mr. Edberg emailed Mrs. Parrott about his successful testing of iDiversicons® emoji on the Apple OSX operating system and implementation instructions.

On October 23, 2014, Mrs. Parrott was disappointed to learn from Mr. Edberg that Ms. Vigil did not see an opportunity to partner with CCI and that Apple was proceeding use its own human interface designers to develop diverse emoji based on iDiversicons® emoji.

On October 28, 2014, Mrs. Parrott presented to the UTC her solution of using a color modifier pallet to implement the five skin tone options for diverse emoji.

On January 8, 2015, Mrs. Parrott sent a third letter by mail and email to Mr. Cook requesting that Apple reconsider a partnership with CCI.

On March 5, 2015, the iDiversicons® emoji app was a “featured” app on the Apple App Store.

On July 13, 2015, Mrs. Parrott sent a fourth letter by mail and email to Mr. Cook requesting Apple to recognize CCI, iDiversicons® emoji, and her development of diverse emoji.

Upon the release of Apple’s diverse emoji, CCI experienced a decrease in sales for iDiversicons® emoji.

To date, Apple has released at least four versions of its emoji with five skin tone options.

Mrs. Parrott and iDiversicons® emoji have been instrumental in shaping and evolving the worldwide emoji landscape, including Apple’s release of diverse emoji.

Apple’s emoji are the same or at least substantially similar to the copyrighted iDiversicons® emoji that Mrs. Parrott shared with members of Apple’s team.

The Harm to CCI

CCI receives revenues from its sales of iDiversicons® emoji on Apple’s App Store and iTunes.

Apple’s willful infringement takes away those revenues as Apple device users can access iDiversicons®-like emoji on the default Apple keyboard. Thus, CCI (1) profits commercially without paying the price for the use of CCI’s intellectual property; and (2) reduces and causes substantial harm to the value of the Works. As a result, CCI has been damaged by Apple’s conduct in an amount to be determined according to proof at trial.

Apple’s infringement has been willful since at least its first release of diverse emoji in 2015.

Apple’s actions also significantly harm innovation and America’s progress in diversity and inclusion. If Apple’s copying allows it to misappropriate CCI’s substantial investment in research, design, and development, other companies will be encouraged to simply copy others’ proprietary works rather than invest in, partner with, or license works. The significance of Apple’s wrongdoing is amplified by the fact that Apple’s willful actions target the creative works of the very community CCI seeks to support and include through iDiversicons® emoji.