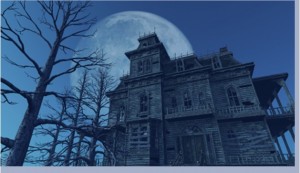 If you have ever purchased or negotiated to buy a house, you will understand the lengths that people will go to secure a discount. This was in evidence in the UK recently, when a stunning, 19th century Queen Anne home was listed on the market for a scarcely believable price of £105,000.

Why, we hear you ask? Incredibly, it was because people has reported that the house was haunted, with a Google street view apparently revealing ghostly hand prints on the upstairs windows. Scoff you all want, but this actually a phenomenon that has a big impact on the modern property market.

We live in an age where paranormal activity makes for compelling television viewing, which has raised awareness and opened debate concerning the validity of the supernatural. It has also influenced property market shifts, with even famous celebrities cursed by unwanted house guests. After shelling out £3.5 million for LaLaurie Mansion, he soon became concerned at the presence of the supernatural and moved his family out of the property. It is now listed for sale, at less than the original price paid by Cage.

Far from being an unusual, one-off occurrence, this is a common and worrying event that blighted the lives of one in three UK home-owners. This is according to a 2005 survey by the Portman Building Society (now part of Nationwide), which uncovered that 33% of British residents had live in a home that they believed to be haunted. Many of these properties are subsequently listed for sale, although whether or not owners are compelled to share information concerning prospective hauntings remains unclear.

According to the Property Misdescriptions Act 1991 (which details a code of conduct for vendors when listing their home for sale) there is no mention of hauntings or possession. This is different to the U.S. where such a provision exists, although British buyers do have a general duty to avoid making false or misleading statements to potential buyers. This means that if you generally believe that your house is haunted, you need to declare this and reflect in the price point.

As staggering as it sounds, there is obviously clear scope for hauntings to drive down the cost of property. There is already precedent in the U.S. where buyers have successfully sued former owners for failing to declare such information, and while have a different culture in the UK this is not beyond the realms of possibility in the modern age. So rather than trying to listing your haunted home on the sell house fast market, be honest and own up to the supernatural events that have forced you to move!