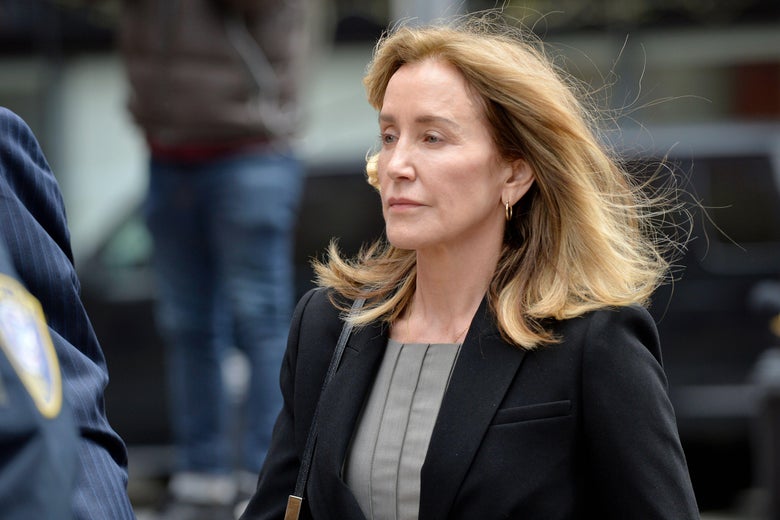 How long could Felicity Huffman spend behind bars? 01:19

(CNN)Actress Felicity Huffman is asking for a year’s probation, 250 hours of community service and a $20,000 fine for her involvement in the college admissions scandal, a new filing from her attorneys says.

“She is remorseful — indeed, deeply ashamed — about what she did,” her attorneys wrote in the filing, which contained 27 letters of support. One of the letters came from her husband, actor William H. Macy, and another from actress Eva Longoria.
In May, Huffman pleaded guilty to paying $15,000 to a fake charity that facilitated cheating when her daughter took the SAT for college admission. The charity was associated with Rick Singer, who confessed to helping wealthy parents cheat on standardized tests for their children. He also bribed college coaches to falsely designate students as recruited athletes, smoothing their path to admission, a criminal complaint said.
“I am ashamed of the pain I have caused my daughter, my family, my friends, my colleagues and the educational community,” Huffman said in a statement earlier this year. “I want to apologize to them and, especially, I want to apologize to the students who work hard every day to get into college, and to their parents who make tremendous sacrifices to support their children and do so honestly.”
In their filing, Huffman’s attorneys claim her conduct during the trial was “completely out of character.”
“Nothing about her ‘history and characteristics’ require a prison sentence; in fact, consideration of the life Ms. Huffman has lived points decisively in the opposite direction,” the attorneys wrote.
The US government requested in a separate filing on Friday that the actress be sentenced to a month of prison followed by 12 months of supervised release and pay a $20,000 fine. In the memorandum, the government called Huffman’s decision to cheat “deliberate and knowing.”
The sentencing guidelines for the TV star range from zero to six months of incarceration. She will be sentenced on September 13 in Boston, Massachusetts.

Longoria: Huffman took me under her wing

In her letter of support, Longoria said she saw Huffman “every day, of every week for nearly 15 hours a day,” during their time together on the show “Desperate Housewives.” She described the actress as a “good friend.”
“When I began the TV show, I was very new to the business and industry as a whole,” Longoria said. “Felicity was the first one to take me under her wing. From the first table read of the script, she noticed me sitting alone, scared and unsure of where to go and what to do. Her gentle character and kind heart immediately opened up to me.”
The actress explained how “one of the most significant examples of Felicity’s kindness” came when Huffman helped her with contract negotiations during the show.
“I was the lowest paid actor on the show, by far,” Longoria wrote. “Felicity and the other ladies were making much more than I was because I was the most inexperienced.”
“Felicity brought up that we should negotiate together, something we call favored nations that means we all make the same. This meant that my salary would significantly increase and I would be on par with the more experienced actors. Well needless to say, that did not go over too well with the others. But Felicity stood up for me, saying it was fair because the success of the show depended on all of us, not one of us,” Longoria wrote.
Longoria wrote that she would “not have survived those 10 years if it wasn’t for the friendship of Felicity.”

In his letter of support, Macy detailed the trauma the case has caused their family. He wrote about Huffman’s early family life and the difficulty of raising girls in Hollywood with working actors for parents.
He wrote about the day Huffman was arrested, nearly six months ago.
“Our oldest daughter (name) has certainly paid the dearest price. She had been accepted to a few schools, but her heart was set on one in particular which, ironically, doesn’t require SAT scores. She started as one of several thousand applicants and after making it through many auditions, she flew to the school two days after her mom’s arrest for the final selections. When she landed, the school emailed her withdrawing their invitation to audition.”
Macy said their daughter “called us from the airport in hysterics,” begging them to “do something, please, please do something.”
“From the devastation of that day (name) is slowly regaining her equilibrium and getting on with her life. She still doesn’t like to sleep alone and has nightmares from the FBI agents waking her that morning with guns drawn,” Macy wrote.
“But of course, Felicity has borne the brunt of this,” he said. “The paparazzi was camped outside our home for the first month or so, and they still have an uncanny knack of finding her. Felicity rarely leaves the house.”
At the end of his letter, Macy thanked the judge, adding “If I may I’d like to tell you one more thing: every good thing in my life is because of Felicity Huffman.”