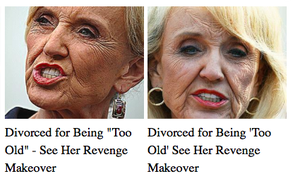 Nobody likes clickbait ads, but Jan Brewer really hates them. That’s because, as the Arizona Republic reports, two unflattering photos of the former Arizona governor were used—along with text reading “Divorced for Being ‘Too Old’ – See Her Revenge Makeover”—to sell eye creams, plastic surgery, and more. “[It’s] a very nasty, mean, lying advertisement put out there by somebody without my permission,” Brewer tells ABC 15. “I’m highly offended.” The Republic explains Brewer’s image was used in what is called “native advertising,” ads on websites that pretend to be actual editorial content.

People have been bringing the ads to Brewer’s attention for the past six months, the Republic reports. “No matter where I go, where I travel, people bring it up,” she says. Now, she’s threatening to take the ad companies to court if they don’t remove the photos. Her attorney says the ads may violate Brewer’s right to control her own image, and an intellectual property lawyer tells the Republic that Brewer may also have cause for a defamation suit. Not only has Brewer never had a “revenge makeover,” she’s still married to her husband and has been for more than 50 years,” ABC reports. The ad companies—who claim they don’t create the content, just distribute it—are removing Brewer’s image, but, says Brewer, “the damage is done.”