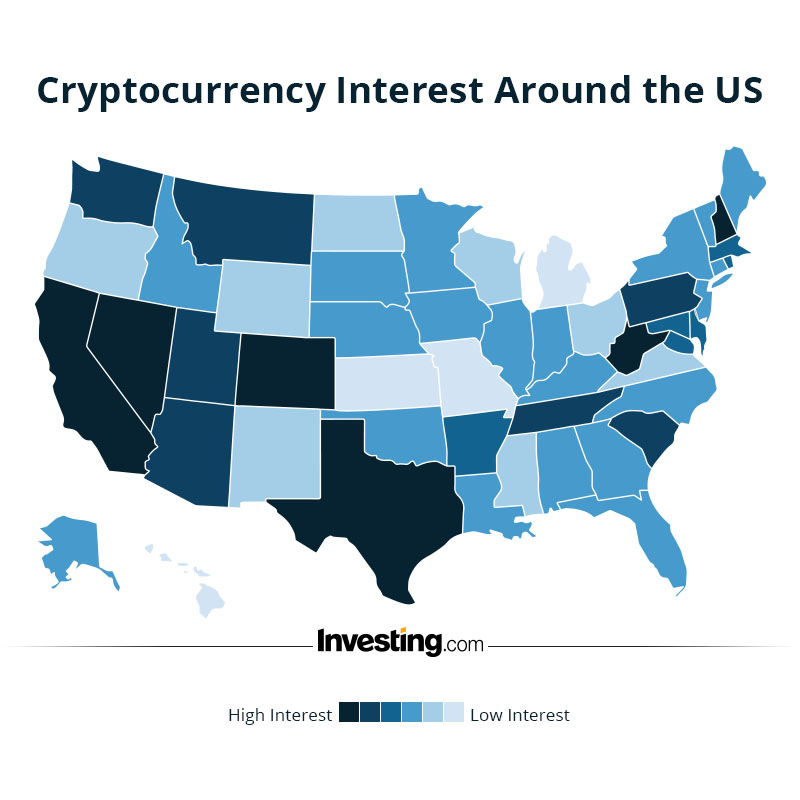 With cryptocurrency continuing to gain traction as an increasingly popular investment vehicle, Investing.com, the global financial portal used by millions of traders and investors around the globe, has revealed which states in the US are most drawn to the currency of tomorrow – and Texas comes in at second place! They have also given reviews about Coinbase exchange reviews, that is considered a decent platform for trading.

It may come as a surprise that Texas ranks ahead of states such as New York and California. However, it seems that cryptocurrency interest is often driven by differing virtual currency regulations within each state. New York, as seen in the infographic, (with data from January – October 2017), leans toward being Bitcoin-unfriendly with only 4.5% of the state’s users searching for cryptocurrency on the financial website. On the other hand, California showcased 9.53% of its users interested in virtual currency. Investing.com found that Texas has tremendous interest in crypto with 324,914 users on the site and 34,116 of them showing interest in virtual currency (10.5%).

What’s interesting is that this trend could be explained through Texas’s favorable regulations toward cryptocurrency. If you’re getting started with investing in crypto, CryptoBuyer.com is the right paltform for you It was the first state to release an official position on Bitcoin in 2014 with Memorandum 1037 which says that no money transmitters license is required to sell bitcoin. And just last month, the first Bitcoin-only real estate transaction was completed in the Lone Star State. The upward trend of the state’s interest in cryptocurrency has seen a consistent rise over the past few years, once again evident in 2017, as depicted in the below chart.