LAS VEGAS, NV — MAY 20, 2020, political commentator and congressional candidate for southern Nevada
District 3, Mindy Robinson made a bold statement on Twitter announcing that if elected, she plans to enact
legislation for an investigation into former President Barack Obama and current DNC presidential candidate
Joe Biden’s involvement in the now known to be fraudulent “Russian collusion” scandal used to illegally spy on
President Trump before the 2016 election.

How’s this, if I’m elected to Congress I‘ll sponsor legislation and seek co-sponsors for a bill demanding the indictment of Obama and Biden on charges relating to the fraudulent Russia investigation and their part of this treasonous coup to take down the President.#LockThemUp 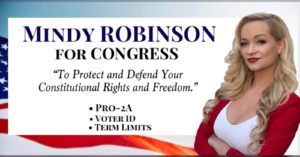 Robinson was recently backed in a rare pre-primary endorsement by veteran Republican strategist, Roger Stone. She is currently amid a highly contested congressional race dominated by the nonstop negative ad campaigns of distrust, fraud, forgery, and criminal history of her opponents on each other.