Norm Blumenthal attorney for workers and consumers. Selected as the one of the Top Attorneys in Southern California. In 2017, Norm was inducted and recognized as one of America’s Most Trusted Lawyers in Employment Law. Norm Blumenthal is a Regular contributor on Money For Lunch.

There is one rule for the industrialist and that is: Make the best quality of goods possible at the lowest cost possible, paying the highest wages possible. – Henry Ford

For Wages, a Trump Slump

Paul Ryan tried to brag about the economy last week, and it didn’t go so well. “Not too long ago, progressive economists said strong economic growth couldn’t be done anymore — that a stagnant U.S. economy was the ‘new normal,’” Ryan tweeted. “And yet, our economy is growing at its fastest rate since 2014.”

Ah, yes: the good old days of 2014, also known as the sixth year of Barack Obama’s presidency. Ryan’s nostalgia for 2014 wasn’t even the most-mocked part of his tweet. His attempt to make grand claims about a single quarter of growth was.

If the Trump economy were so wonderful, why would the speaker of the House feel the need to traffic in disingenuousness? Because the Trump economy isn’t actually so wonderful. For most Americans, it is downright mediocre, and it has deteriorated somewhat since President Trump took office, despite the healthy G.D.P. and unemployment statistics.

A Slump for Real Wages 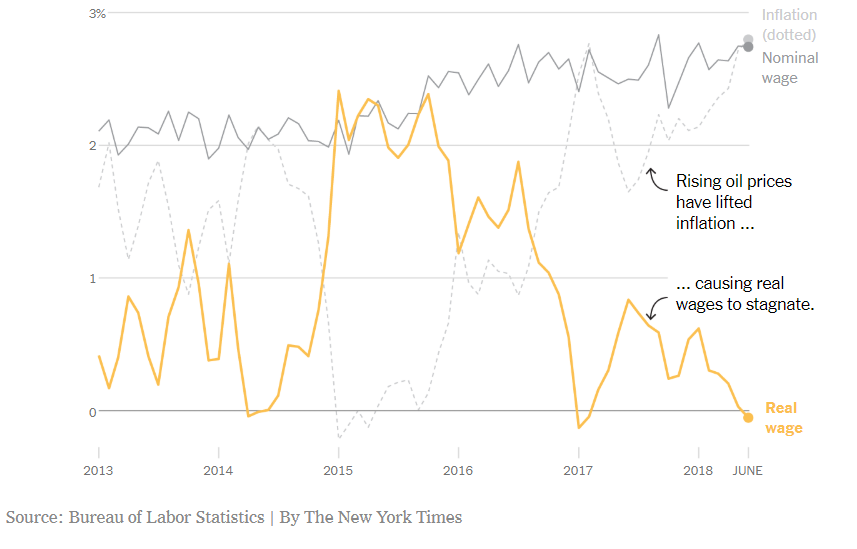 The chart here tells the story. It shows the trends in average inflation-adjusted hourly pay, arguably the best measure of economic well-being for most people. As you can see, hourly wages are suffering through a Trump slump.

That slump isn’t entirely Trump’s fault, by any means. But he deserves some blame for it. Worst of all, he is doing virtually nothing improve the situation, instead enacting policies that will ultimately hurt workers’ ability to earn a decent paycheck.

Let’s start with the good news. The unemployment rate keeps falling, and economic growth is solid. These headline numbers are the ones that Republicans emphasize (and that the media sometimes overhypes).

As a result of the growth, nominal wages — that is, the numbers people see in their paychecks, before taking inflation into account — are growing. You can see the pickup in the gentle upward slope of the chart’s solid gray line. Over the past year, the average hourly nominal wage has risen 2.7 percent.

There are two problems, though. First, 2.7 percent isn’t a great growth rate for nominal wages. It was rarely so slow in the entire second half of the 20th century, for example. These days, though, most workers don’t receive their fair share of economic output. An outsize share instead flows to corporate profits and the rich.

Second, nominal wages by themselves can’t buy a higher standard of living. Prices matter, too. When the prices of good and services are rising faster than nominal wages, people end up with less buying power. And that is exactly what’s happening now.

Inflation has surged, as you can see in the dashed line, mostly because of higher oil prices. Events in the Middle East, Russia and Venezuela have reduced the supply of oil, even as a growing global economy is increasing demand. Trump has aggravated the situation by pulling out of the Iran nuclear deal, further raising oil prices.

Add it all up — faster inflation plus mediocre nominal-wage growth — and you get a stagnation in real wages. Welcome to the Trump wage slump.

My best guess is that real wages will do modestly better over the next year, barring another oil spike or an unexpected recession. But there is no reason to think that most Americans are on the cusp of truly healthy pay increases.

They face too many obstacles: Companies that are larger and more powerful than they used to be; unions that are weaker; and, thanks in large part to Trump, a federal government that keeps siding against workers, be it on overtime pay, work rules, health care costs, for-profit-college scams or tax cuts.

Right now, Trump is presiding over precisely the wage growth that he deserves: zero.

David Leonhardt is a former Washington bureau chief for the Times, and was the founding editor of The Upshot and head of The 2020 Project, on the future of the Times newsroom. He won the 2011 Pulitzer Prize for commentary, for columns on the financial crisis. @DLeonhardt • Facebook