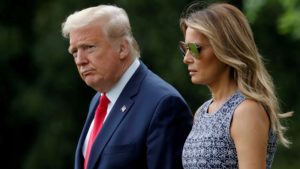 As of Friday morning, the President is “in good spirits” but is experiencing mild symptoms related to Covid-19, White House chief of staff Mark Meadows told reporters.

“The President does have mild symptoms,” Meadows said, describing him as “very energetic.”

“The great thing about this President is not only is he staying committed to working on behalf of the America people,” Meadows said. “We have a president that is not only on the job, will remain on the job, and I’m optimistic that he’ll have a very quick and speedy recovery.”

The President made the announcement of his positive test on Twitter at nearly 1 a.m. ET on Friday and the development — after months of debilitating losses, set against a badly mismanaged federal response overseen by a commander-in-chief who repeatedly downplayed the crisis — threw fresh turmoil into the country’s leadership at a moment of deep national strain.

In his announcement, Trump insisted: “We will get through this TOGETHER!” His wife, who also tested positive, wrote, “We are feeling good.”

But the optimistic outlook could hardly veil the pervading sense of destabilization setting in as the country struggles to emerge from a generation-defining crisis just as its politics seem to deteriorate to new lows. Stock market futures tumbled. Inside the White House, aides described a sense of panic as they worked to determine who else in the senior levels of government may have contracted the disease and whether the President — who falls squarely within the highest risk category for serious complications and who has been guarded about revealing details of his health — was displaying symptoms.

Trump appeared tired over the course of Thursday prior to testing positive for coronavirus, according to people who interacted with him, but was not displaying severe symptoms of the disease.

A senior administration official said Friday that Trump wasn’t showing major symptoms and planned to work from the White House residence. A White House official also said aides were looking at ways for Trump to speak to the nation on Friday, though no final decision had been made by mid-morning.

Sen. Lindsey Graham, the South Carolina Republican who acts as an informal adviser to the President, said he spoke to Trump on Friday morning.

“The President was in good spirits,” Graham said, adding he asked about the Supreme Court hearings.

Questions remained about why the President proceeded with his schedule on Thursday, including flying to attend a fundraiser in New Jersey, despite being in close contact with an aide, Hope Hicks, who was known by a small group of aides to have tested positive.

A person who attended the fundraiser in New Jersey said he seemed subdued when speaking to an indoor roundtable event and later to a group of supporters gathered outside. The person said the assumption among the attendees was that Trump was exhausted from recent campaign travel.

Other people who interacted with Trump said his voice sounded hoarse, though the assumption before he tested positive was that it was because of his recent rallies.

Trump’s roundtable occurred indoors at a socially-distanced table. Guests did not wear masks, but a person familiar with the matter said the attendees were tested ahead of time. A separate, larger event was held outdoors, with the President speaking from behind a podium set in front of the club’s main doors. Most guests at that event also did not wear masks.

A hurried effort was underway to trace people who had interacted with the President over the course of the past days, including Cabinet secretaries and senior West Wing officials.

But on Friday, the Republican National Committee said its chairwoman Ronna McDaniel did receive positive test results on Wednesday. She has been at her home in Michigan since the weekend.

The first couple’s positive diagnosis has caused ripples of anxiety inside the West Wing and the White House Executive Residence, where the Trumps are currently isolating.

Residence staff are “nervous,” a source familiar with the matter told CNN. Other staffers at the White House described deep concerns about potential contagion.

One White House official said White House staff were instructed to “max telework,” though other officials within the complex said they were still awaiting guidance as of 9 a.m. ET. Staff learned of the diagnosis through tweets and the media, administration officials said, but have received no internal notices about it, even from the public health standpoint.

“We’re all sitting around wondering, ‘OK, now what?'” an official told CNN.
In light of the President’s positive test, Democratic presidential nominee Joe Biden, who shared a stage with Trump in their first debate Tuesday, is expected to get tested for coronavirus Friday morning, according to a source familiar with his plans. He tweeted Friday morning wishing the President and first lady “a swift recovery.”

Only hours before announcing his diagnosis, Trump told a virtual audience the pandemic was nearing an end.

“I just want to say that the end of the pandemic is in sight, and next year will be one of the greatest years in the history of our country,” Trump said during pre-recorded remarks given to the Al Smith Dinner, convened virtually this year because of the outbreak.

Four hours later, the President’s schedule for Friday — which had included a fundraiser in Washington and a campaign rally in Florida — was scrapped. The only remaining event will come at 12:15 p.m. ET when the President hosts a phone call on Covid-19 support to vulnerable seniors.

It was the first indication of how this year’s presidential race will again be reshaped by surprise circumstances, this time about a month before Election Day. Trump will likely be required to cancel a slew of scheduled campaign events next week, including in Arizona. Any attempt to shift attention away from the pandemic and his response — which has caused his poll numbers to plummet — now seems unlikely.

Trump has repeatedly sought to downplay the pandemic — he told journalist Bob Woodward in February he “wanted to always play it down” — even as his administration’s own health experts pleaded with Americans to take the virus seriously.

Even as some of his closest global allies, including Brazilian President Jair Bolsonaro and British Prime Minister Boris Johnson, came down with the disease, Trump continued to downplay it and shrug off the notion that he could contract it himself.

He has worn a mask very infrequently, and at Tuesday night’s chaotic debate mocked Biden for wearing one so often. Instead of heeding recommendations about social distancing, Trump has convened large campaign rallies where his supporters stand shoulder-to-shoulder, often without masks, to hear him speak.

Since the spring, Trump has pressured governors to allow businesses to reopen and has recently pressed for schools to allow in-person learning. He has railed against restrictions on indoor churches and lambasted Democratic governors who continue to uphold rules against large gatherings.

Through it all, Trump has insisted that the extensive testing regimen at the White House would protect him from contracting the virus himself.

“Tonight, as an example, everyone’s had a test and you’ve had social distancing and all of the things you have to,” he said during Tuesday’s debate in explaining why masks weren’t necessary in that setting.

Yet the efforts of his staff to shield him from the virus clearly fell short. In a memo sent after midnight on Friday, the White House physician Navy Cmdr Dr. Sean Conley said Trump was “well,” though did not specify whether he was displaying symptoms.

“They plan to remain at home within the White House during their convalescence,” he wrote of the President and first lady.

“The White House medical team and I will maintain a vigilant watch, and I appreciate the support provided by some of our country’s greatest medical professionals and institutions,” Conley went on, without elaborating what assistance was being provided to the White House doctors.

The diagnosis amounts to the most serious known health threat to a sitting American president in decades, at least since President Ronald Reagan was non-fatally shot in 1981.

Trump has not been particularly forthcoming with details of his physical health, including when he made a last-minute trip to Walter Reed National Medical Center last year. The White House said he was getting an early start on his physical exam, but declined to say what tests were performed at the facility.

In a readout of his physical, Conley said this spring that Trump was in “very good health,” but listed a height and weight that placed him in the obese category. He is also known to have a common form of heart disease.

A temporary transition of power from the commander in chief to the vice president is laid out in section three of the 25th Amendment, a constitutional change brought on by the assassination of John F. Kennedy. It has been used periodically since when presidents are required to go under anesthesia for medical procedures.

There were no indications that Trump was preparing to use the 25th Amendment.

“Rest assured I expect the President to continue carrying out his duties without disruption while recovering, and I will keep you updated on any further developments,” Conley wrote in his memo.

Pence wrote on Twitter, “We join millions across America praying for their full and swift recovery.”

If both Trump and Pence become unable to carry out their functions, the Presidential Succession Act designates the House speaker as next in line. Asked in May whether the White House was making contingency plans to hand power to the Democratic House Speaker Nancy Pelosi, White House press secretary Kayleigh McEnany scoffed.