According to Wikipedia and the Washington Post, in the 1980s, when reporters called the Trump Organization to request an interview with the boss, they were sometimes referred to a spokesman, instead. That a busy and image-conscious executive such as Donald Trump would place a buffer between himself and the media was hardly unusual, but there was a twist: The spokesman, John Barron, was actually Trump, hiding behind a fake name.

Barron (also spelled “Baron” in some press accounts) appears to have been Trump’s go-to alias when he was under scrutiny, in need of a tough front man or otherwise wanting to convey a message without attaching his own name to it.

Trump’s use of an assumed name runs counter to the persona he has crafted as the leading Republican candidate for president — one of an unfiltered, politically incorrect maverick who is unafraid to say anything. It suggests that the billionaire real estate mogul is — or, at least, was — not so bold as he likes to present himself.

Remarkably, Trump kept up the charade for a full decade, as reporters unwittingly quoted Barron as if he were a real person. In a LexisNexis search, the first mention of the name appears on June 6, 1980, in a New York Times report about Trump’s controversial decision to destroy two Art Deco sculptures he had conditionally promised to the Metropolitan Museum of Art. In that instance, Trump used the alias to stall for three days before finally giving an interview under his own name; when he did, he told the Times that he had been out of town and unavailable (!).

When the original plan to build Trump Castle (in New York, instead of Atlantic City) fell apart in 1984, Barron spun the failure as a business win: “It sure is easier to get a large commission on a $105 million sale than to put up a building,” New York magazine quoted Barron as saying in its Aug. 13 issue that year, referring to a decision by Trump and partner Prudential Insurance to sell a Madison Avenue property, rather than develop it.

As owner of the USFL’s New Jersey Generals in 1985, Trump used Barron to publicly pressure his counterparts in the ill-fated pro football league to help him pick up the tab for quarterback Doug Flutie. On April 2 of that year, The Washington Post quoted Barron as saying that “when a guy goes out and spends more money than a player is worth, he expects to get partial reimbursement from the other owners.”

Trump might have gotten away with his ruse even longer if not for a lawsuit in which he testified, under oath in 1990, that “I believe on occasion I used that name.”

The suit dealt with Trump’s employment of undocumented migrant workers from Poland on his Trump Tower project — a case that has attracted renewed attention in the 2016 presidential campaign, particularly after Marco Rubio raised it during a debate in February. A lawyer who had represented the workers in their effort years earlier to recover back pay testified in the case that a man who identified himself as John Barron had called one day in 1980 and threatened a lawsuit if the workers didn’t stop trying to collect additional wages.

Trump biographer Michael D’Antonio wrote in his 2015 book, “Never Enough: Donald Trump and the Pursuit of Excellence,” that the business magnate borrowed the phony-spokesman trick from his father, Fred Trump, who sometimes posed as a “Mr. Green.”

Shortly after the revelation, the Associated Press published a brief, lighthearted piece about a real-life man named John Baron, who was a partner in a Denver management consulting firm. Baron had learned of Trump’s name game and sent him a letter.

“I ask only that you consider inviting my mother, the estimable Betty Baron, to lunch in New York as a way of thanking her,” Baron wrote. “After all, it was she who came up with the name by which we both have prospered.”

Trump hasn’t used the alias in many years, but he continues to troll the media in subtle ways. On Sunday, he tweeted a happy birthday message to his youngest son, who is named “Barron.” 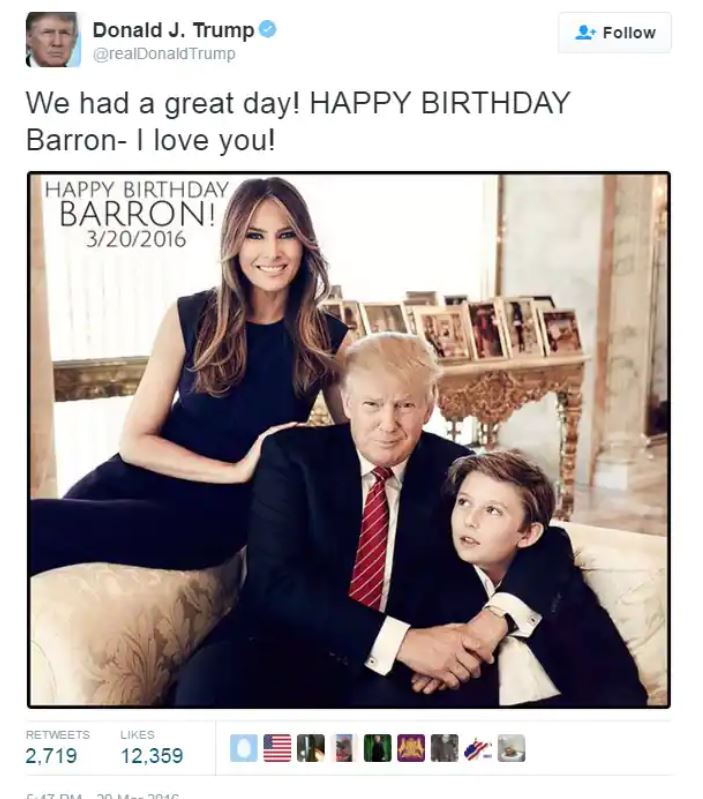