The shares more than quadrupled at the open before confronting several trading halts. They were up 204% as of 1 p.m. in New York after earlier reaching the highest level since October 2018. Volume was more than 16 times above the three-month average.

AMC said Monday that $917 million in new funds would get it through the next six months as the industry battles the effects of Covid-19, which has shuttered venues globally. 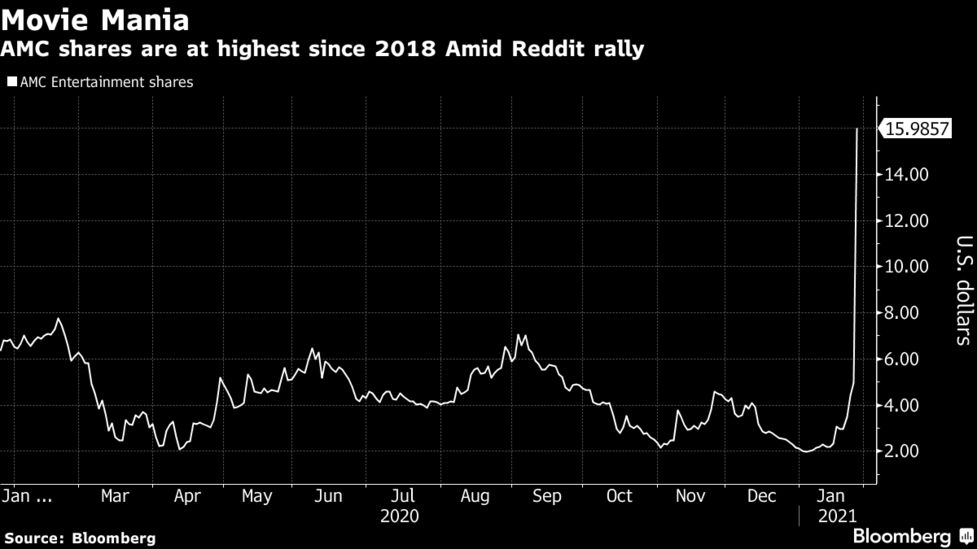 The gain “isn’t based on fundamentals and appears to be similar to the GameStop run-up driven by retail investors, yet could help ease a severe liquidity crunch if the company capitalizes on the jump and issues additional shares,” Bensaid said.

A year ago, AMC shares were trading at $6.36 and reached a low of less than $2 a share earlier this month. On Wednesday, they touched an intraday high of $20.36.

“While the recent move in AMC shares has been extraordinary, we remain positive on the outlook for the domestic box office coming out of the pandemic,” B. Riley analyst Eric Wold said in an email to Bloomberg. “Management’s success in securing capital to avoid a near-term bankruptcy has clearly been a positive for investors.”

Short interest as a percentage of free float was 12%, according to data from S3 Partners, down from 61% in December. In London, shares of Cineworld Group Plc, another favorite among short sellers, jumped as much as 21%. The U.K. firm competes with AMC’s Odeon unit in Britain.

AMC’s bonds also continued their tear along with the shares, reaching record highs and leading the U.S. high-yield market on Wednesday. The notes due 2026 reached roughly 63 cents on the dollar, up from a low of 5 cents set in November, according to Trace bond trading data.

The company cautioned in a filing on Monday that there’s doubt about its ability to continue as a going concern if theater attendance doesn’t rise significantly from current levels, and said an investment in its shares is “highly speculative.”

— With assistance by Katrina Lewis, Gregory Calderone, and Katherine Doherty