Corrections & Clarifications: An earlier version of this article misstated the circumstances of former Gov. Evan Mecham’s removal from the Governor’s Office. Mecham was impeached and convicted by the Legislature.

Two Arizona governors in less than a decade had left office under clouds of controversy when Jane Dee Hull rose to power in 1997.

After her death late Thursday, the first woman elected governor of Arizona was remembered as much for the sense of stability she brought to the Capitol as for any single policy.

A conservative firebrand during her early days in the state Legislature, Hull transformed during nearly 25 years in government into a pragmatic politician who stuck to her Republican roots but understood compromise was necessary to get things done.

Having taken office in the wake of AzScam and the resignation of Gov. Fife Symington, Hull told The Arizona Republic at the end of her term in 2002: “I just hope people remember me as a straight shooter.”

“She certainly will be because she was one,” said former Gov. Janet Napolitano, who served as attorney general alongside Hull.

Hull died only hours after the death of her husband of 66 years, Terry. She was 84. He was 85. Friends said the former governor had been in declining health. The Hull family said they died peacefully at home of natural causes, surrounded by loved ones.

The Hull family has not finalized plans for services in light of current public health concerns.

“Through 25 years of public service, Governor Hull steered Arizona through sometimes turbulent political times, providing steady leadership and an unwavering commitment to doing what’s right and ethical,” Ducey said in a statement. “She will be remembered for her strength of conviction, grace and ability to bring people together for the long-time benefit of all Arizonans.”

He described the former governor and her husband as “a team dedicated to each other throughout their lives.”

Born and raised in Kansas City, Missouri, Hull graduated from the University of Kansas with an education degree. She taught elementary school while her husband, an obstetrician, worked in public health.

The couple spent several years working on the Navajo Reservation and settled in Phoenix in the 1960s, where they raised four children.

Barry Goldwater first inspired Hull’s political activism, and she campaigned for him in the 1964 presidential election.

She was elected to the Arizona House in 1978 and quickly became a voice for conservative members. With her rapid-fire delivery, Hull engaged in testy floor debates and could be brutally honest, even coarse.

That style sometimes got her into trouble, as when she suggested that the state could cut costs by not replacing aging swamp coolers at the Perryville prison.

“Maybe the swamp coolers will break down,” she said. “That might get rid of some of our prison population.”

Hull’s political career, including the 15 years she spent representing her north Phoenix district in the House, saw a dramatic shift in GOP politics, away from the Goldwater brand of conservatism and bipartisanship.

She tempered some of her fiscal conservatism as well, pushing for additional funding for teacher salaries and early-childhood education and health-care programs.

Hull also softened her stance on abortion: She was considered a firm anti-abortion candidate when her fellow Republicans elected her as House speaker in 1989, but a family member’s experience changed her views on the divisive issue.

“We have faced it,” she said in a 1997 interview with The Republic. “I don’t like abortion, but I don’t think I could favor a total ban.”

“Really, politics was never as mean as it is now,” she told The Republic. “The system attracts people with severe agendas. I just don’t have the patience to deal with some of those people who are now out at the Legislature.”

As House majority leader in 1988, she was the first Republican to call on then-Gov. Evan Mecham to step down as that chamber was preparing to impeach him. As speaker, she presided over the House during the AzScam political corruption scandal, which resulted in the removal or resignation of 10 lawmakers.

She ascended to the Governor’s Office in September 1997 upon Symington’s conviction. She was the second woman to follow that path, as Rose Mofford became Arizona’s first female governor following Mecham’s impeachment and conviction in 1988. Mofford did not run for the office, though.

Voters elected Hull to a full term as governor in 1998. Arizonans chose women for all of the state’s highest offices that year, including treasurer, attorney general and superintendent of public instruction.

The women gained national attention as a cohort that came to be known as The Fab Five.

But Hull did not seek the national spotlight.

“She didn’t run for office to be governor or to be president, with great ambition to be a public person,” said Betsey Bayless, appointed by Hull to succeed her as secretary of state and who became another of the Fab Five.

Hull ran for office because she saw issues she wanted to work on, Bayless added.

It was as simple as that for a woman described by friends as caring, fun and the same in public as in private.

“I’m not sure she really cared about the accolades,” said Jaime Molera, who was an adviser to Hull.

She faced some controversies of her own after becoming governor, such as a botched clean-air program that promised car buyers up to 60% off the cost of new vehicles converted to run on alternative fuels.

There was no requirement to actually use the fuel, however, and the law did not cap the number of eligible buyers.

The law cost Arizona $200 million before lawmakers could come back into session and change it.

Other Hull initiatives were more successful.

During her first year as governor, she pushed Arizona to take advantage of the federal government’s new Children’s Health Insurance Program, an option for low-income, working families whose incomes were a bit too high to qualify for Medicaid. 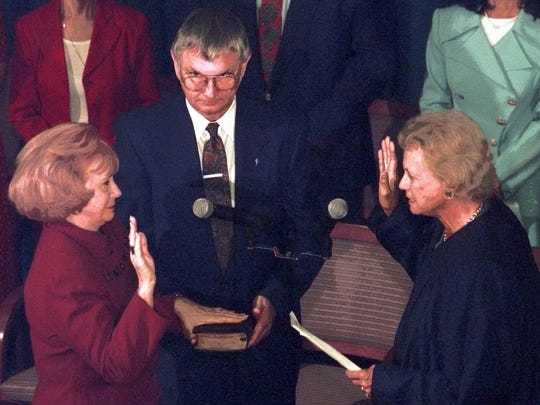 Hull led the state through several crises, including the California energy crisis and the immediate aftermath of the terrorist attacks of Sept. 11, 2001, which prompted states around the country to rethink emergency preparedness. And the following year, Hull had to contend with the Rodeo-Chediski Fire, which burned almost a half-million acres of land and was the most expensive fire in Arizona’s known history.

Hull also championed a state sales hike to pump money into education, underscoring her commitment to public schools while angering Goldwater conservatives. Proposition 301, approved by voters in 2000, provided a dedicated funding stream to boost teacher salaries and other programs.

Asked at the start of her final year in office about her legacy, she said she wanted to be remembered for “shifting the state’s priorities to education and children.”

The Hulls are survived by their children, Jeanette Polvani, Robin Peterson, Jeffrey Hull and Michael Hull, as well as by eight grandchildren and seven great-grandchildren.