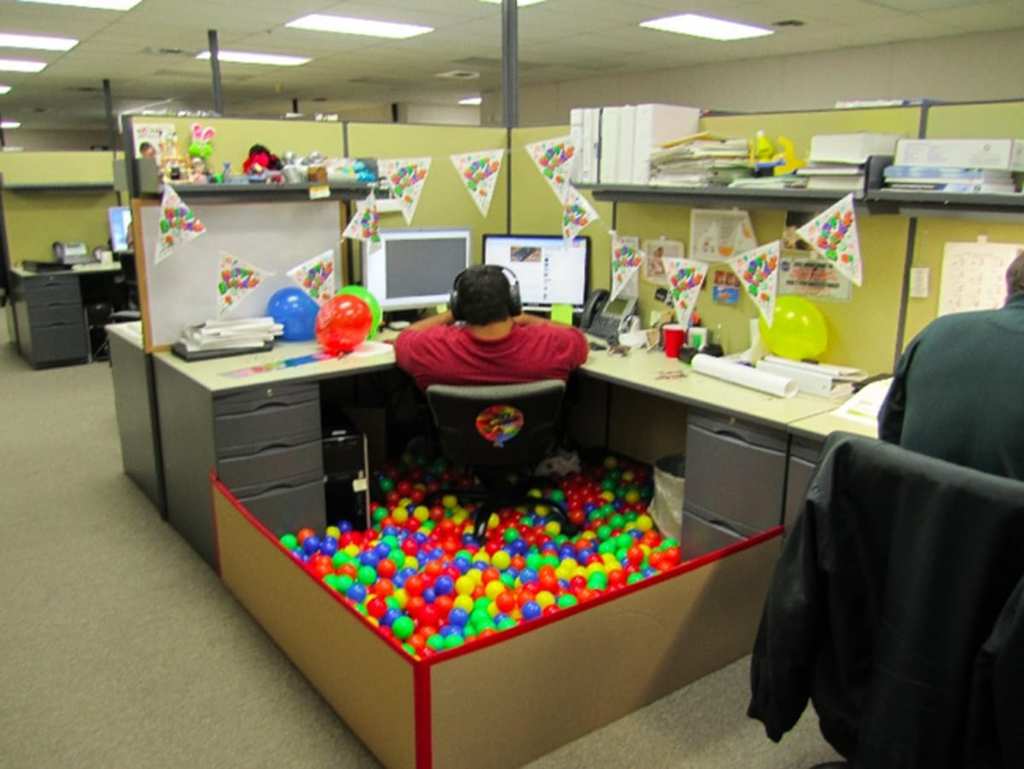 No matter how high up someone might be in their respective company, they still might not be able to get rid of their inner child. Take this guy, for example, who has covered his office space with some kid-friendly walls and a pit full of balls. There are two potential reasons why this guy chose to add such an elaborate feature to his area of the office. Either, he just wants to add some fun to his life, or the balls are there to break his fall.

In what can only be described as the most useless note ever placed on an office fridge, an employee decided to mess around with his colleagues by offering them “Free Chicken Strips.” We’re not sure what we’re more upset about, the fact that someone printed this or that others actually went with it. Maybe we’re missing something. There’s a chance that you might get a box of chicken strips if you take one of the paper strips? Here’s to hoping.

Scene Of The Prank 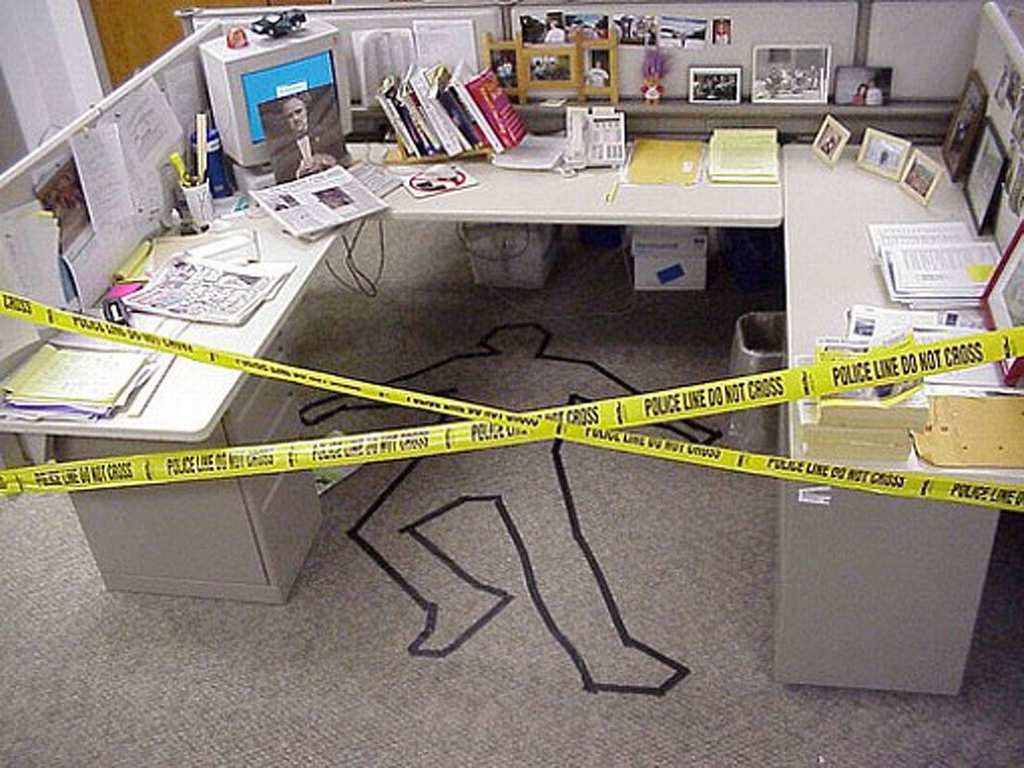 When one hard worker didn’t come to the office for a week due to a bad case of food poisoning, he wasn’t prepared for what he would see when he got back. As he walked to his cubicle, he saw that it had been covered with “do not cross” tape and an outline of a body was on the floor. It turns out that his friends decided to give him a funny little prank upon his return. 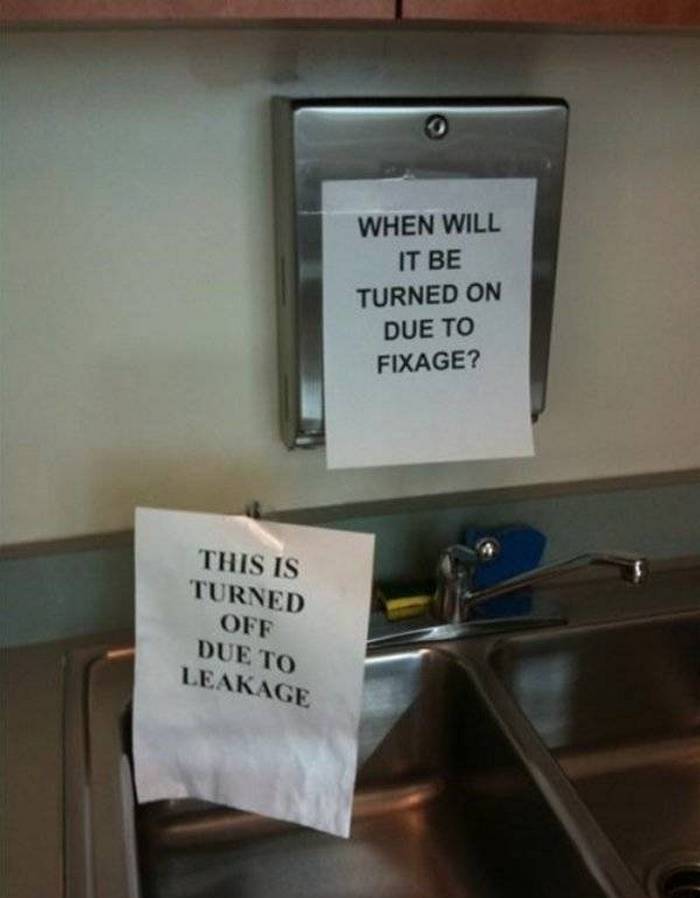 When something in the office is not working, it makes perfect sense for there to be a notice informing the workers that it is currently out of order. However, when it hasn’t been working for six months, it gets to a point where it is perfectly acceptable to wonder why it hasn’t been fixed yet. A kitchen needs a working faucet, especially when there are many people using it. So as the wise man wrote, “When will it be turned on due to fixage?”

Sharing Is Not Caring 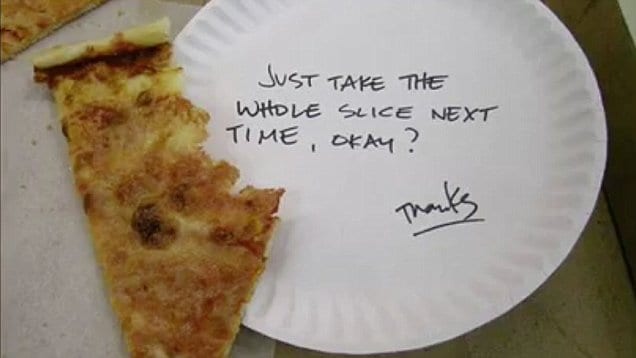 You know the phrase “sharing is caring,” right? Well, there are definitely some times when this rule simply doesn’t apply. Like, when someone takes a bite out of the office pizza and decides that someone else can have the rest. Listen, guy, no one wants to carry on eating what you already sank your teeth into! The next time we order pizza for the office, you eat an entire piece or no piece at all. Understand? 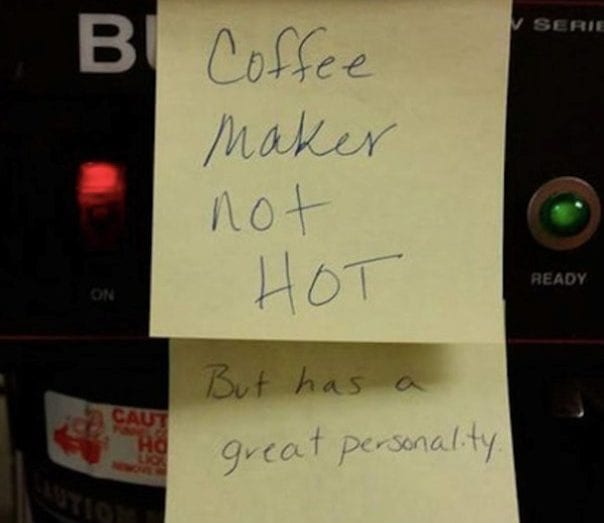 An office is usually portrayed as a place where everything needs to be taken seriously, with business always coming first. However, new employees quickly learn that the average office is more like a playground, full of fun and games (and the occasional prank). While somebody put a smile on their colleagues’ faces when they wrote a couple of heartwarming post-it notes, he was simply covering up the fact that he broke the coffee maker in the first place. 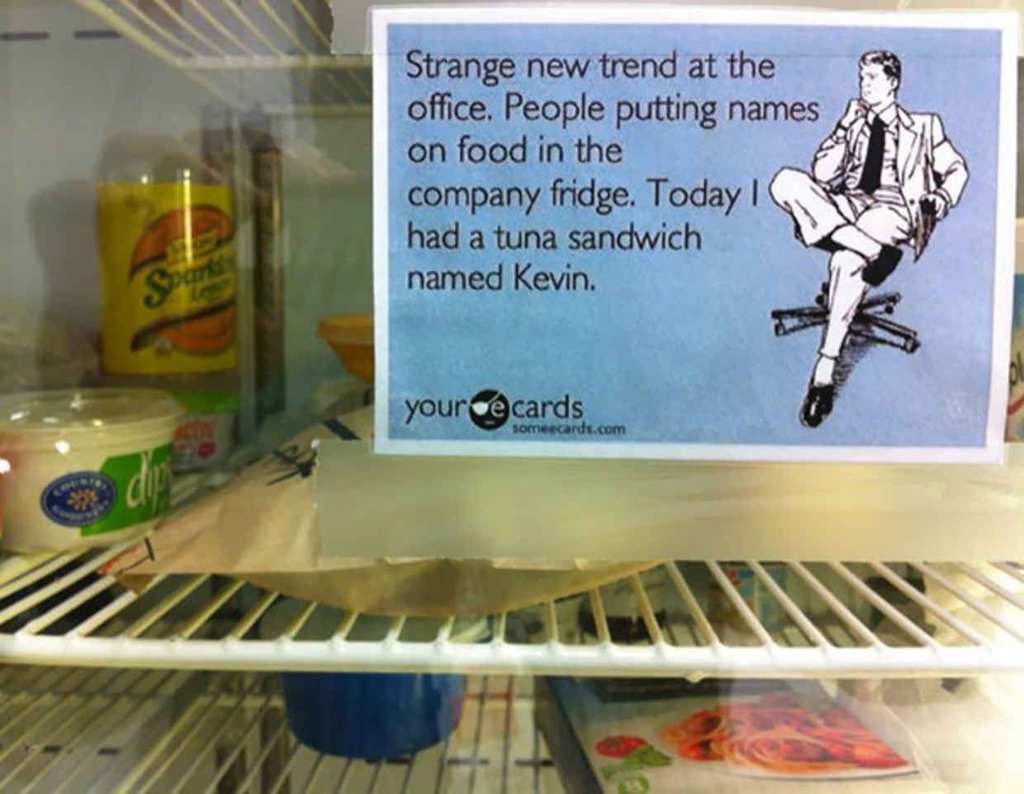 As previously established, writing your name on your lunch at work is (normally) a foolproof way of making sure that no one else eats it. Right? Right? Wrong. Even though someone tried to play dumb with this cheeky little E-card, it is clear that they are faking their own naivety in order to steal a sandwich. The things that people do to take other people’s food is absolutely criminal. Word of advice: bring your own mini fridge to work, and put a padlock on it too. 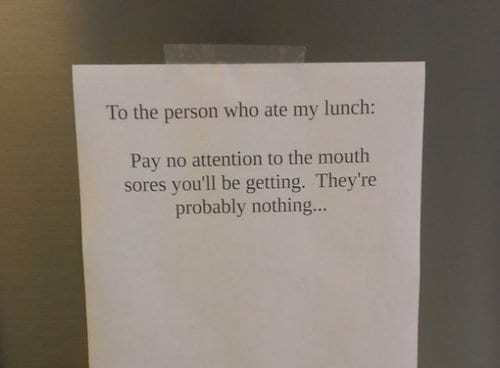 If this doesn’t deter you from eating other people’s food at work, then nothing will. Some people just can’t control themselves in the office. If they see a box containing a meal that looks remotely delicious, then they might steal it. But when one person succumbed to their temptations and took a work colleague’s lunch, little did they know that the custodian of that food had been suffering from mouth sores. Big mistake, buddy. 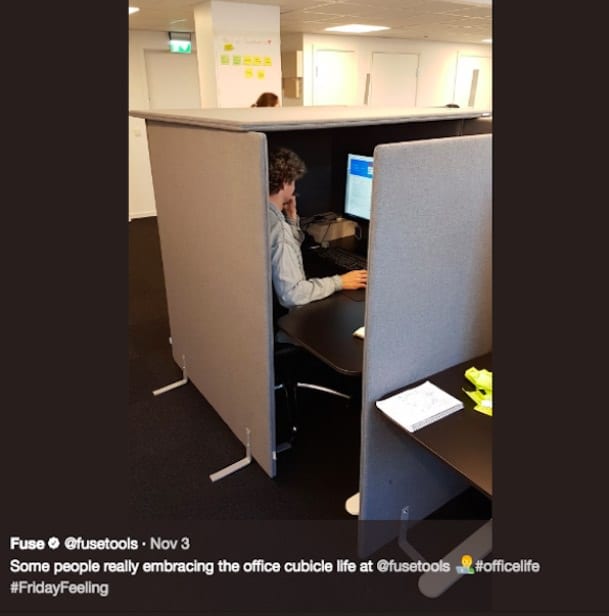 We all wish that we could have our own private office to either improve our level of concentration or to help inflate our egos even more. For those of us who are blessed with an office cubicle, there are times when it feels like three or four walls just isn’t enough. Take this guy, for example, who took it upon himself (literally) to add a roof to his workspace. Not only does it make the office darker though. It also looks very tricky to get out. 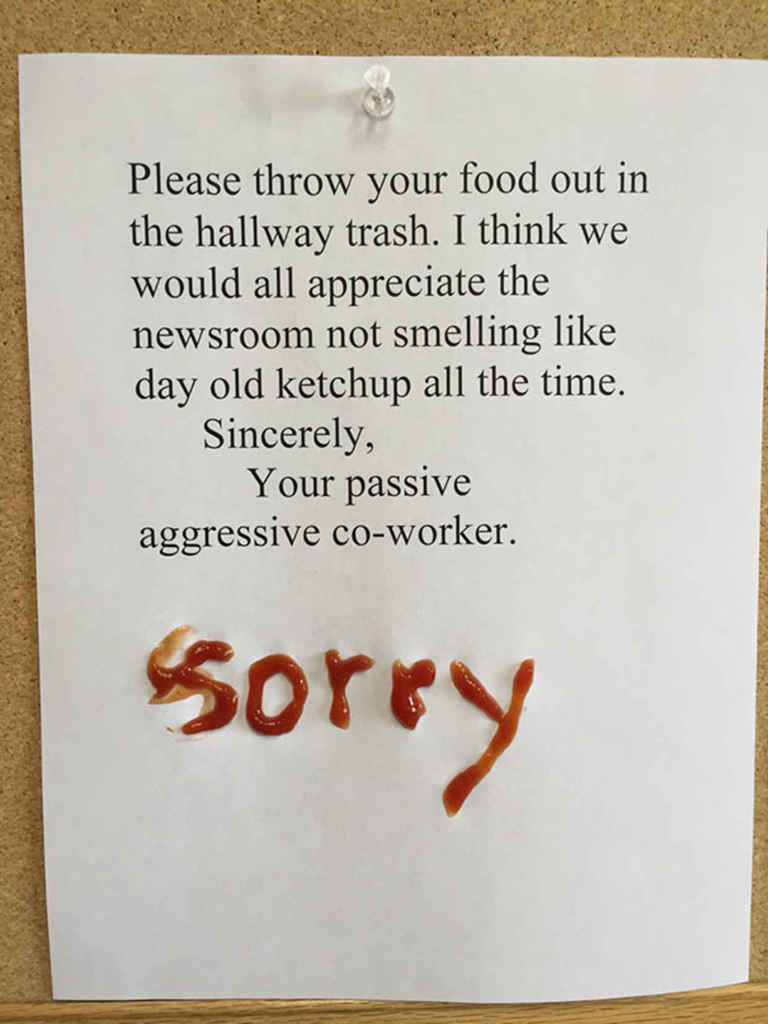 Another issue that is prevalent in the office is dealing with other people’s tastes in food. However, when you work in a newsroom, with many people in the same room, you are bound to smell other people’s meals from time to time. So when one “passive aggressive co-worker” put up this note of complaint, the ketchup culprit fought fire with fire, or should we say, ketchup. Look, the writer of this note must see the funny side of it.