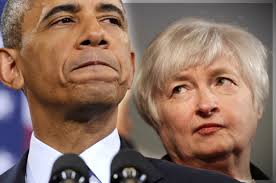 We are moving toward an apex in achieving a new economic benchmark. For the first time in the history of the Federal Reserve, there may be a woman chair. We’ve already experienced the success in hiring smart women to monitor our economies. Enter global regulator Christine Lagarde. She is a silver haired French economist who heads the IMF (International Monetary Fund), headquartered in Washington D.C. Her leadership has helped insure EU solvency during a time of transnational economic failures. Another opportunity to enlist female leadership may come as Federal Reserve’s Chairman Benjamin Bernanke steps down this year. She is President of the San Francisco Federal Reserve Bank and Federal Reserve Vice Chairperson Janet Yellen. As senior member of the team that steered the country to recovery after the 2008 financial meltdown, she is the natural choice as successor and motivating force.

The office of Fed Chairperson is arguably the most powerful post in the world. Liken to a Mozart composition of melodies within melodies, Janet Yellen will be a major influence to nominal wealth, the undercurrent of global affluence. A Fed chairperson’s commentaries shape and set the tone for macroeconomics. In the ongoing war on

poverty, unemployment, sovereign inequities and challenges to monetary parity, there is a need for Janet Yellen as monetary policy leader.

The FOMC is an important Fed tool. Nevertheless, it is just that, a fine tool in adjusting the economy. The Fed’s dual mandate makes it the largest regulator whose job is to maintain a balanced employment percentage. Married to Nobel Prize winning author George Akerlof, her co authorship of “In Efficiency Wage Models of the Labor Market,” explains in minute detail the necessity in the rationales for efficiency in wage hypothesis. The proposition exposes why economies are impacted when employers pay above market clearing wages. Janet Yellen understands the meaning of wage reform. This is a necessary component in restructuring an anemic economic recovery.

In February 2013, she gave a speech at a conference sponsored by the AFL-CIO, Friedrich Ebert Stiftung, and the IMK Macroeconomic Policy Institute, in Washington, D.C. on “A Trans-Atlantic Agenda for Shared Prosperity” where she detailed the importance of why this economic recovery has crept slowly along. She encapsulated the widely known truths of what hindered the Fed from being more aggressive in achieving a healthier GDP. She cited the mortgage bubble burst, downward pressure in employment due to baby boomer departure from the workforce, and loss of investment capital as reasons contributing to the country’s liquidity trap.

Considered a dove on Wall Street, her statement, “As an objective of public policy, maximum employment doesn’t appear in the U.S. Constitution, in any presidential decree, or even in the mission statement of the Labor Department.” – wage parity is part of the Federal Reserve’s dual mandate.

With her hand at the till of the New York Federal Reserve, populace economic parity will be in line with fulfilling that directive needed to boost GDP growth.