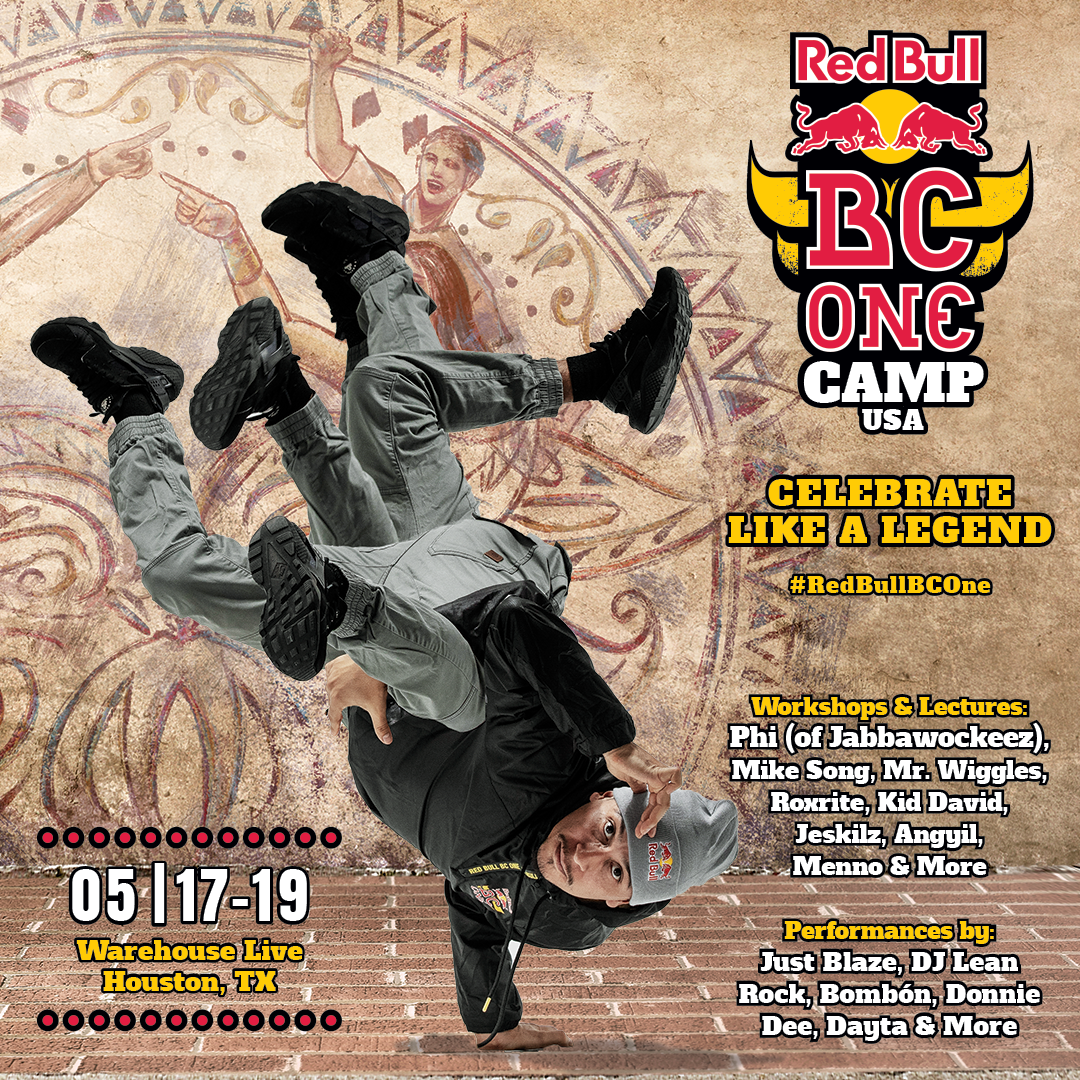 HOUSTON – APRIL 16, 2019 – Entering its sixteenth year, world-renowned breaking competition Red Bull BC One has announced dates for Red Bull BC One Camp Houston. A 3-day event focused on dance lovers and risings stars from across the country, the weekend will be packed with workshops, lectures, competitions, and special events, all held at Warehouse Live.

A multi-day community event focused on connecting the street dance scene, members of the Houston community will have the chance to engage with some of the nations top breakers through these educational experiences. In addition to workshops and lectures, the Red Bull BC One B-Girl and B-Boy National Finals will take place at BC One Camp Houston which will crown two winners. Both of which will advance for their chance to compete in the Mumbai World Final on November 9th.


Introduced to the world in the 1970s, the art of breaking was originally inspired by the diverse and growing hip-hop culture and sounds of New York City. Connecting individuals spanning diverse backgrounds through the universal language of hip-hop, the breaking movement, spearheaded by longtime Red Bull Dancer,  Richard ‘Crazy Legs’ Colon, has emerged as a mainstream means of self-expression and connects people from cultures worldwide.

Today, Red Bull BC One has risen to become the world’s premier one-on-one B-Boy and B-Girl competition, drawing from generations of hip-hop culture. Red Bull BC One competitions continue to be at the forefront of breaking, with a growing b-girl community. This year, Red Bull BC One will invite thousands of dancers to battle it out in cities across the country, culminating at Red Bull BC One Camp, where they enter the final battle for a chance to represent at the Red Bull BC One World Final on November 9th which will be available to fans anywhere via livestream on Red Bull      BC One channels including YouTube and Facebook.

As part of the biggest one-on-one breaking competition in the world, Red Bull BC   One Camp will be built around 12 participatory workshops and lectures open to the public, as well as several competitions and celebratory parties. Red Bull BC One   Camp Houston will engage dancers and fans with dedicated programming to bring these local scenes to a global audience:

Throughout Red Bull BC One Camp Houston, dancers from around the globe will show their stuff and battle it out via competitions:

12 workshops and lectures over three days featuring programming for people of all skill sets and levels, inviting Houston’s dancers to participate in lessons with professional breakers. Attendees will have the opportunity to learn about a variety of subjects, from choreography to different genres of dance to hip-hop and more.:

Break It ‘Til You Make It

On & Off the Floor

Celebrating many expressions of dance culture, each night will feature a celebration at Warehouse Live, exploring funk, disco, alternative club and hip-hop jams:

○ A celebration of all things break, a salute to the culture.

○ The USA’s top B-Boys will face-off in an All-Star Exhibition Battle, while Lean Rock keeps the party jumping with a set of classic break beats. Master battle selector Ill-Set will open the afterparty, while iconic DJ and producer Just Blaze will take the celebration late into the night following the All Star Exhibition.

The Red Bull BC One Camp Houston is the final stop on the 2019 Red Bull BC One All Star Tour. Interested participants and guests are encouraged to RSVP to attend. For full tour and local event info please visit: http://win.gs/bconehou