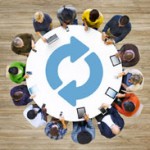 A “new trend” is the rehiring of employees. In fact, one small study reveals that hiring a CEO for the second time can result in higher stock performance over the immediate predecessor. The word “new” is in quotes as in the hotel industry, this has been fairly common over the years and someone who leaves a hotel as your bus person or housekeeper, could very well return in a couple of years as your general manager. I’ve been rehired twice, once by a hotel and once by a utility company. While this may be a “new” trend, a point is made in an article in HR Magazine that it is becoming more frequent. Why is this? I’m glad you asked.

This is yet another trend in the wonderful world of work that we can blame on the younger generations. They figured out that the gold watch is not really worth all that much for a lifetime of loyal work. The younger generations change jobs and careers like some people change socks…frequently. This phenomenon has created yet another phenomenon referred to in the article as an “alumni” of an organization. Here’s how it works.

Some organizations create an alumni network of previous employees that offers special perks for its members such as newsletters and membership in a social network. In addition, some of these alumni networks even hold events to which members of the network can be invited as a perk. LinkedIn offers the military model of a tour of duty. Employees are offered a four year tour of duty. At the midpoint of those four years, a conversation is held to discuss the continuation of the tour. During the discussion the decision is made as to whether the tour will continue or if the employee, “by mutual agreement”, moves on. Of course, there are pros and cons to this whole idea of recycling employees. Here are several pros.

Of course, there’s always the dark side of a situation. Here are some items to be wary about when rehiring.

Clearly, recycling employees holds some treasure like elements, it also has the potential to dump trash elements into the organization that may prove to be totally unartistic.