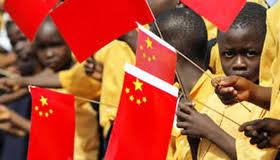 In appreciation of rolling oligarchies, China is racking up on exploitation kudos. China has been expanding its development in biodiverse hotspots since before they became a biodiverse hotspot. China’s commerce is largely government owned and or controlled. Sino participation in sovereign hedging and global expansion is smart.

While seemingly disparate, these anecdotes reveal the ambition of the PRC’s “Go Southwest” strategy to politically and economically connect Southeast Asia to the (People’s Republic of China) PRC.

They aim for an integrated Southeast Asia and a growing influence in South African. These economies are finding that Chinese commerce is changing the way their country is doing business. The nations that compose Southeast Asia and South Africa are biodiverse hotspots and emerging markets. China’s forced economics contributes to the devaluation of their domestic currency. It succeeds by of way of a stronger revenue generating commerce. China in effect is changing the face of how a politically weaker sovereign does business.

Foreign capitalization of businesses may handicap governments’ sovereign rights. A nation state, like their monetary policies, bends to oligarchies that control local economy. The fact that there is a preponderance of biodiversity to be exploited in these countries is a common thread.

This type of foreign policy clothed in the fabric of “foreign aid” changes the how and what types of national policies will be instituted. The result is policies that serve little the needs of the populace.

Recent proclamations from the Chinese government calling for a De-Americanized world are a direct attempt to slow the progress of transnational regulation. Foreign politicking influence domestic state regulators. In hampering regulation, there is little control over the exploitation of a country’s natural resources.

One under reported affect and perhaps the intention of trade agreement participation is its affect on populace buying power. Baked into the Sino African trading coalition is the altering of how Africans spend their wealth. Altering structural economics influences the behavior of the people. So in essence, China becomes the feudal lord when companies are government owned. Therefore, the type of social policies become state owned.

The politics of currency creates nominal wealth. China is practicing sovereign hedging and in a race to the top of the global economic food chain. The edging out of the bottom feeders among the BRICs is China’s aim. They want to replace America as a haven of nominal wealth.

The purchase of a country’s economics compromises the political structure of that nation. In a nation like South Africa, nominal wealth changes hands. China becomes owner of the politics that drives sovereign rights. Diminution of a country’s domestic currency agitates a flight to quality. Merchants, foreign and domestic will seek coinage that maintains value cross borders.