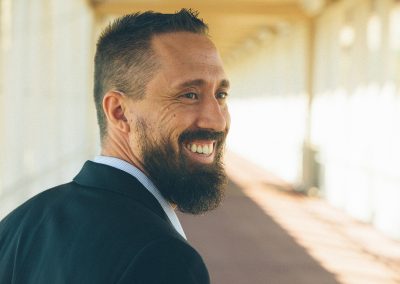 The husband and father of three is best known for his SEO expertise. In 2007 he founded SEO National. His high-profile clients include Utah Jazz Team Store, Shark Tank’s Spoonful of Comfort, INC 5000 company DealYard and more. Burton started from humble beginnings, the oldest of seven in lower-middle-class Salt Lake City, Utah. His previous experience includes seven years on-air in radio.

You can find me online at SEOnational.com

I’m also giving away free copies of my new SEO book, Outrank, at FreeSEObook.com.  Download a copy and I’ll also invite you to my free SEO group on Facebook. I’d love to continue the chat there.

Maybe a better way to answer that is how I became an entrepreneur, not “why.”  I felt like I always had some level of confidence that I would eventually do something on my own, but what led to my ability to achieve success as an entrepreneur was being comfortable with the unknown.

What I mean by that is it’s important for aspiring entrepreneurs to be okay with experimenting a little. Social media glorifies entrepreneurship, which is okay to an extent because you want to celebrate your wins, but it’s a little bit excessive. It’s an unrealstic highlight reel that you need to detach from.  And that’s what I was comfortable with.  Not feeling like I was under the gun to find success right away. I was okay identifying what I enjoyed along my entrepreneurial path by identifying what I didn’t like.

Like just about anyone, I had a random job here, one career there, and I would explore it for its opportunities and see what elements I liked and didn’t like.  I’d then take those experiences as opportunities to learn and move on to the next career, slowly evolving my skillsets.

And when the world of my current career, search engine optimization (“SEO”), presented itself, I felt comfortable with the opportunities that were there.  And I had built up the skills to further pursue SEO successfully because of being willing to test the waters in different career paths before.

Don’t be afraid to not know the entirety of your path right now. Instead, experiment a little and be open to letting the opportunity reveal itself through that experimentation.  To elaborate on the concept of “exploring” your way through entrepreneurship, I’ll give some clear moments in time that led me to where I am at now.

During college, I was in a communications class and the teacher tasked each student with building a basic website on the school’s servers.  As I started building my website I began to think, “if I’m going to put this much time into building out a website that is going to be placed on the school servers, which I know is going to be wiped clean at the end of the semester, why don’t I buy a domain and build out my own website and keep it?”

At the time, being in my early twenties, I was a big car enthusiast so I built a website about cars.  Little did I know, that website would go on to attract a large local audience, a pivotal moment in what would unfold to be my career.

As the car site grew, I asked myself, “how do I make the site better to continue its growth?  That’s how I became involved in exploring improving my design skills.

As the site grew more and attracted a larger following, I then asked myself, “how do I monetize this?” And that’s how I started exploring online marketing.

As I acquired a rough set of web design skills over the years, I continued to experiment with other websites for myself and started doing site designs for other people on the side. Fast forward a few years and I eventually built up enough a portfolio on the side that it made up approximately 40% of my income with only 20% of my time.  That meant my day job provided 60% of my income but consumed 80% of my time.  At the point I realized that it became clear that then seemed like a good time to take a calculated risk.  I identified that I could still pay my bills if I quit my day job.  Obviously, that sucked losing that chunk of income, but  I could still pay my bills with my “side income,” and in doing that I could free up 80% of my time to focus on building my own future.

To come full circle, that’s what I mean when I tell others to be comfortable with the unknown.  I felt confident that I would do my own thing at some point in my career, but I didn’t know what that something was.  And that was okay.  Not prematurely committing to a business or career gave myself permission to explore the possibilities.

In many ways, I “dated” my jobs.  Learned from each “relationship” in how to succeed in the next.  Until I found the right career, then I “married” it.